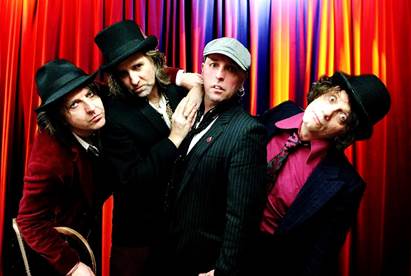 Brit rock dandies Last Great Dreamers have posted a new video for their upcoming single ‘Glitterball Apocalypse’, which is set for release on April 15th via Ray Records. The clip, which premiered exclusively with Vive le Rock magazine on Monday, blends surreal, nightmarishly psychedelic imagery with sublime performance footage of the quartet in action, offering a tantalising taste of what audiences can expect when they hit the road as guests of Tigertailz on a UK tour starting this weekend.

The visual mix of dark humour and the Dreamers’ signature louche glamour perfectly complements the themes of the track. As frontman Marc Valentine explains, “It’s a song about the casualties of rock n roll. I think it’s probably inspired by our own journey through the years – we’ve lost a quite a few friends along the way, either through tragedy or self-destruction. There have been some exceptionally dark times and often it does feel like we’re the last ones standing. It still has all the Dreamers trademarks; it’s full of swagger and hook-laden choruses, I don’t think the fans will be disappointed”.

‘Glitterball Apocalypse’ is the second single to be taken from a forthcoming new album. Due for release this autumn, it will be the band’s first collection of new material since Marc and guitarist Slyder reunited in late 2014. With powerhouse rhythm section Ian Scruffykid (bass) and Denley Slade (drums) now completing the line-up, Slyder promises “we genuinely feel that we have an album of hit singles, we’re not trying to be or sound like anything else, we’re just letting it flow and enjoying the process. It will be an unmistakable Dreamers album, but maybe the lyrical content will be a bit darker… we’ve certainly lived a bit and experienced a lot since we last wrote together.” The release is being funded by a 90 day PledgeMusic, and fans can get involved now atwww.pledgemusic.com/projects/lastgreatdreamers.

Last Great Dreamers will be out on the road as special guest of glam metal titans Tigertailz from April 8th.  Catch them live at the following dates; –

** Last Great Dreamers headline dates.  All other shows with Tigertailz.