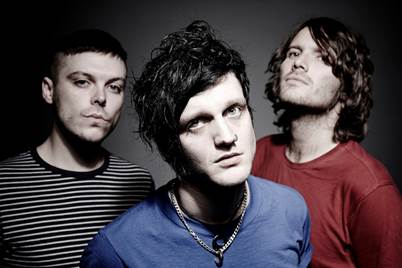 Hailing from Macclesfield, England, The Virginmarys make anthems that scream with all the potent sound and fury of modern punk acts, shot through with the raw honesty of prime British rock of the early 1970s, before the wizards and capes overcame the attacking and dynamic.

The UK-based three-piece recently unveiled a staggering new track, Motherless Land, on Consequence of Sound; the follow-up to Into Dust, Motherless Land bleeds of “no-frills, honest-to-god British rock with an undeniable punk edge”, and a video for the track is currently being finalised. The song – as with Into Dust – comes from the band’s forthcoming studio album, Divides, due out May 6th via Spinefarm Records, their first full-length release for the label.

And now, having just returned from a successful 12-date US tour, The Virginmarys are focusing once again on home turf with two very intimate UK shows (one in Manchester and one in London) to celebrate the release of Divides.

Full details of these special ‘album launch’ gigs are below, along with two festival outings including a spot at the first Stone Free Festival at the O2 in London.

Tickets for the headline shows will be available from Friday April 8th @ 10am GMT.