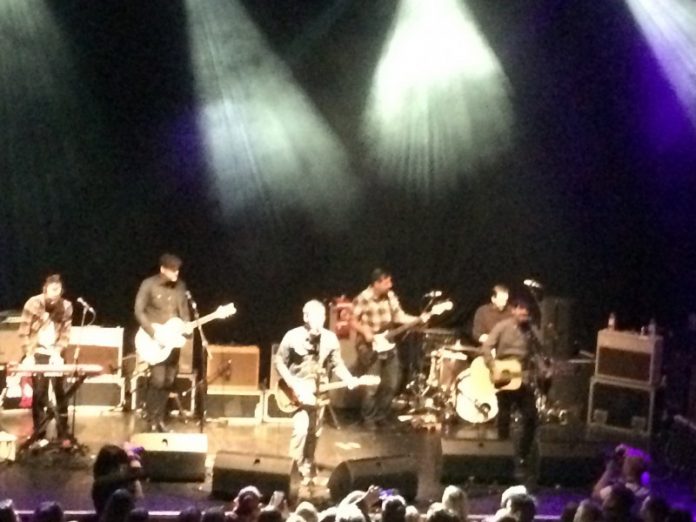 Cough sweets, Adele songs and some of the best modern singer-songwriter stuff around.

Gigs aren’t meant to start like this: “Yeah I had a big entrance planned” laughs Brian Fallon. “But I needed a cough sweet……” It turns out the hero of the hour has gone gone down with a cold and the showery weather today hasn’t helped him.

Welcome to England, as, in fairness, he notes himself.

The illness is perhaps fitting for a tour that takes in a record entitled “Painkillers” (but then again, perhaps not). Emerging last month, the 12 song opus is one of the finest singer-songwriter type records that you’ll hear this year. Updating and growing his sound, but still unmistakably Fallon, understandably most of the set is from it.

Everyone mentions Springsteen when discussing Fallon’s work, and whilst he’s always been savvy enough not to copy it’s fair to say the songs here imbibe from The Boss. Not least of which is the brilliant opener “Red Lights”, and “Rosemary” sees this flock of Crowes – there are six men on stage – in full flight.

Although the record is new, Fallon is already playing with the concept. The title track gets a mighty new arrangement here and is a real highlight, as is “Steve McQueen” with its odd mix of fragility and yet a confident chorus and “A Wonderful Life” is just, well, a wonderful song.

It’s not all stuff off the new album, as right in the middle of the night he’d proved his versatility by playing Gaslight Anthem’s “Stray Paper” up there solo. If that was the only GA cut then his other band. The Horrible Crowes, material gets a liberal airing throughout. “Sugar” and “Lady Killers” are dark and the end of the set, save for “Among Other Foolish Things” is almost entirely from that period, “Mary Ann” is quite superb, with its heavy, bluesy licks, and “Behold The Hurricane” which closes the set, does so in a slamming way.

As ever with Fallon there’s no encore. (“I’m not gonna make you clap on demand, that way we both keep our dignity”). But we shouldn’t really expect anything other from an unassuming and engaging character who earlier on the set had sung Adele to us, reckoned he would write a big hit single like “Wonderwall” if he could, and liked pop music.

He also said something else to sum his current ethos up. “People follow this band, they are open to listening to songs they don’t even know, it’s restored my faith in music.” The smile he wore throughout the set suggested he might mean it too. As a cure for a cold that might be the best medicine there is.