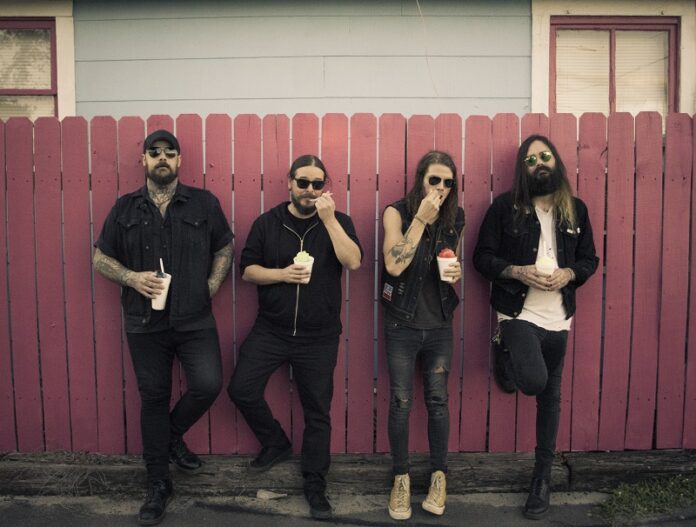 Like a true American classic at this point, HE IS LEGEND resemble an old, dog-eared novel or nearly worn-out VHS tape that you dust off in order take a familiar ride and get thrilled at the same time.  Their alchemy of reckless rock ‘n’ roll grooves, heavy metal unpredictability, and downright indefinable magic continues to enchant, enthrall, and enrapture a devout fan base, quietly bordering on cult-like fascination.

With the album release right around the corner, the band also delivers the one-two punch of a double single with “THE PROWLER” and “LIFELESS LEMONADE.” Both emerge with fangs bared, sweat on the brow, and blood on the chin. Listen here.

“This album is a testament to our band’s endurance,” the band says. “It is easily our most aggressive album to date, born and bred from the odd shift in the world that affected everyone. We have always used our music as an outlet, and no better time than when the world felt so much like an ENDLESS HALLWAY.”

He Is Legend’s catalog spans I Am Hollywood, Suck Out the Poison, It HatesYou, Heavy Fruit, and Few. However, it would be 2019’s White Bat that elevated them to another level altogether. Revolver highlighted it as “rollicking,“ while Metal Injection awarded it a rating of “9/10″ and christened them “legends, indeed.” Riff Magazine hailed them as “one of metal’s best-kept secrets,” and Heavy Blog Is Heavy applauded White Bat as “easily the band’s best album in a decade, but it even takes a run at being the strongest collection of their career.“ Plus, it generated nearly 10 million-plus total streams.

For ENDLESS HALWAY, the band wrote in their rehearsal space in Wilmington, NC. They recorded drums outside of Knoxville before cutting guitars with Al Jacob at Warrior Sound in Chapel Hill, NC. Vocals would be a different story as Croom endured one of the most trying seasons of his life.

“We had to push the vocal recording, because my stomach was failing due to my diabetes,” he shares. “It was so bad I couldn’t perform. It took a while to get back to some semblance of normal. Eventually, I hopped in the car and drove 10 hours to Nashville to record at Mitch Marlow’s place. I’m a different person now. The universe throws those things at you to make you stronger. That’s personal growth.”