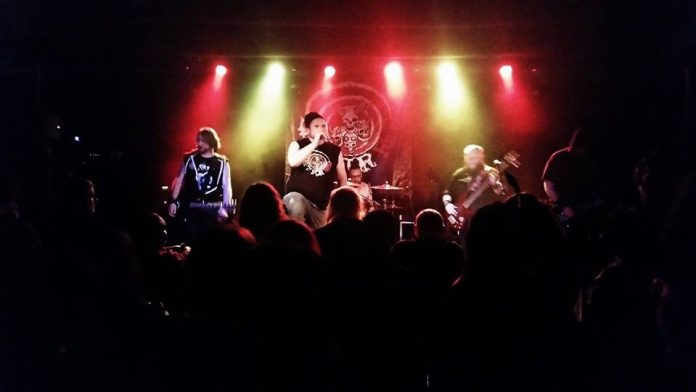 Out Of Sanity get immediate bonus points. They pass the Thin Lizzy test. That is to say, they play “Don’t Believe A Word” and don’t mess it up. Credentials established by playing the greatest hard rock band of all time, they end their set by knocking out a more than passable “Cowboys From Hell.” Before the recently formed band turn their hands to the covers, they treat us to a couple of stellar cuts of their own, “Into The Ground” is best amongst them. And there is talent here to suggest Into Out Of Sanity could be making audiences crazy in months to come.

The intensity levels go up a few notches when Vexxen arrive. Youthful they might be but the five deal in huge riffs and song structure that sound like Every Time I Die in places. “Parasite” adds a touch more melody to the mix, but only so they can make the enormous middle section really hit home. Like the band that preceded them, Vexxen play a cover. Their choice gives away their youth as A Day To Remember track is smashed out with passion. Closing track “Have You Met My Brother Seth?” is better still and marks the band as one to watch out for. On this evidence it doesn’t seem like we’ve seen last of Vexxen.

The thing about I Hate You More is this: stick them on any stage anywhere and they are just great. Granted that wouldn’t make much of a review so it’s best to add that here – as always –  IHYM deliver a set that is choc-full of magnificent hardcore thrash metal. The Brummie bruisers play “Simplify The Ways To Die,” somehow managing to make it sound even nastier than its title and where “Murder Shot” is just brutal usually – tonight it’s like being pummelled with a concrete block. In a good way. “War Machine” sends them into battle, and you wouldn’t want “Jackhammer” to send any different to how it does right here. I Hate You More, then. Just about the best way to spread the hate there is.

London’s One For Sorrow made quite an impression when last we saw them in these parts last summer. Tonight is no different. You can give it all the labels you like – and bands like Orange Goblin, Corrosion Of Conformity and Pantera wouldn’t be too far away as references – but the bottom line is quite simple: Tracks like “Underfoot” are just great music. “Fools And Liars” is heavier and brings with it a huge groove and “Strong” is more of the same. By the time they end with “Into The Woods,” which might begin with an ear for melody, but really cuts loose before the end, One For Sorrow have proved yet again just how good they are.

All of which leaves Left For Red take to the stage. They’ve done this countless times but it’s never been quite like tonight and the band have pulled out all the stops. Y’see tonight is about their new album. “All Things Known And Buried” is out in April, but that doesn’t stop them playing the whole thing in full tonight. This gives the audience, many of whom won’t be familiar with it, chance to understand just how good “ATKNAB” is.

But this is a party. And for the festivities they’ve brought a dance music intro along. The five men who make up LFR arrive onstage after Wu Tang Clan (MVM can’t lie, we’ve never heard the track, but we know how to read a setlist when we see one…..) and straight into “……Buried’s” lead single “Master Of The Game.”

Given that it’s an album show, the highlights here are the stunning “Reborn,” which, as MVM said in our review is a veritable standout moment. You sense that LFR know how good a song they have on their hands here too, given their confidence to turn it into a crowd singalong. “Echoes Of Strangers” is a fine heavy metal song and the riff filled “Shatter The Illusion” is made to be played in this setting, as is a superb “Ascension.”

Album done with the last notes of “Solace In Memories,” the balloons and party poppers arrive, as do a couple of favourite tracks from the 2013 EP “Mercy Flight.” It’s title track sounds relaxed here, while the aggressive “Kneel Before You Die” rounds things off in fine style. The celebratory mood continues with good, old fashioned splitting up of the crowd for a chant.

Left For Red seem to know they’ve got something rather good to unleash on the world in a couple of months. They tried it out amongst friends (literally and metaphorically) tonight and it was superb. There ain’t no party like a Left For Red Party. As a pop combo might have said once.

Thanks to Tony Gaskin for the photo

Previous article
A Haven Of Qualiity
Next article
Gigs This Month