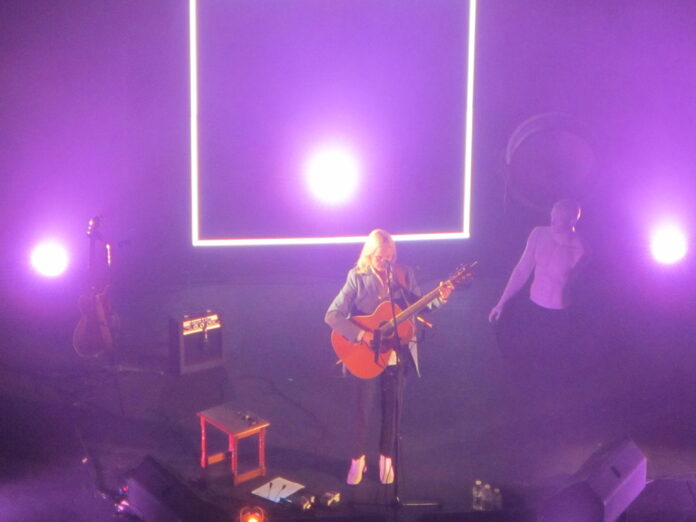 We find out during tonight`s set that it`s been four and a half years since Laura Marling toured the UK, her last show in Birmingham was at the Moseley Folk Festival in September 2017 and for me I last saw her in April 2015 at this same venue. Her most recent album `Song For Our Daughter` was released last April and as this was the first show on this UK tour we were all in the dark as to what she would play. The tour goes under the banner of `Laura Marling Solo` and that is indeed what we get tonight, Laura, a variety of guitars and a smattering of numbers that span her sparkling career. The first curve ball for me what when she shared a musical quaternity of songs that included `Take The Night Off / I Was An Eagle / You Know and Breath in a suited format, each blending into each other. All these songs coming from 2013`s `Once I Was An Eagle` and this 1500 strong sold out crowd were understandably in awe as these numbers were played.

The emotional roller coaster continued with the quite forceful `Strange` from the latest release, the empowering `Master Hunter`, powerful `Hope In The Air` and the haunting `What He Wrote`. There`s a couple of tracks from `Daughter` with `Hope We Meet Again` and the emotive `The End Of The Affair` which the singer explains was written about an imaginary Max but two acquaintances of hers with that same name phoned her about it and she jokes that one was her psychotherapist. There`s three songs beginning with S that follow with a new song called `Shadows` before `Sophia` an ode to a mythical deity and `Salinas` a kind of dustbowl melodrama.

We have shades of dark and light as the show progresses with numbers such as `Once`, `Daisy`, `How Can I`, `Goodbye England (Covered In Snow)` with the dreamlike `Wild Fire` and `Held Down` interspersed between. Tonight`s ninety minute set closes out with three numbers from the latest release as the singer reminds us all that she doesn`t really do encores. The ballad like `Fortune` and title track `Song For Our Daughter` follow before we are left with the heart wrenching `For You` a song about finding lasting love after years of searching in vain.

It`s been over six years since I last saw Laura Marling and she has continued to not only produce consistently exacting standards with regards to her own solo albums but has made time to record two excellent albums with Mike Lindsay of the band Tunng under the name LUMP.

At times tonight she reminded me of Joni Mitchell but with the ability to play guitar like Roy Harper. There`s not too many artists around that could command an audience`s attention for ninety minutes with just a guitar. Laura tours the UK for the next couple of weeks with most nights long sold out before heading to the West Coast of the United States for a few dates. Let`s hope it`s not another four and a half years before she graces us with her presence.