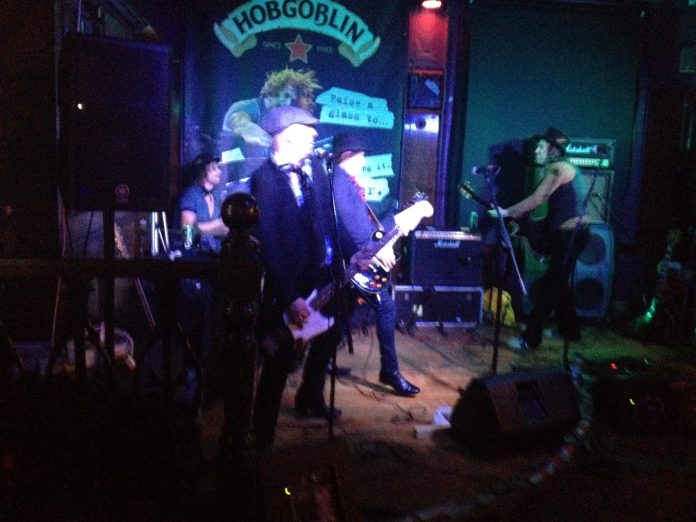 Nestled into a quiet corner of leafy Worcestershire, there’s a lot to like about The Iron Road. Not least the framed picture of Thin Lizzy’s Bad Reputation album in the corridor. Any place that pays homage to the greatest hard rock band of all time has got to pretty good, right?

There was a time in the mid 1990’s when The Last Great Dreamers – who are giving this town a bash for the first time in 24 years tonight –  if not quite to Thin Lizzy’s level, were tipped to be a very big deal indeed.

Their hooks, their choruses, their look, all marked them out as ones to watch. Kerrang! no less, back when they used to cover proper music, announced the LGD as the “new dandies of British Rock.” They released the album “Retrosexual,” came second in the best new band of 1995 poll and…. it never quite happened.

Then last year – seemingly out of the blue – they were back. They’d found a lost album “Crash Landing In Teenage Heaven,” recorded prior to their 1997 spilt, and they readied it for release. Some shows then have morphed into a proper tour, which brings us to this particular rock pub in the south midlands.

What happens after the four piece arrive onstage with “Supernature Natural” is every inch like being transported back in a rock time machine to a time before anything had sub genres, before Nu Metal and all its evils and when Honeycrack should have ruled the world and The Wildhearts first album was the best thing on the planet.

Last Great Dreamers know all this stuff too. That’s why they are dressed like this – imagine Dogs D’amour circa “Errol Flynn” – and that’s why songs like the brilliant “No. 1 Wonderboy” and “Mary Wants” sound like the Senseless Things at their best, that’s also why every song rides in on a turbocharged, hook and is packed with harmonies bands these days would kill for.

“Sci-Fi Louise” changes pace, but “Ashtray Eyes” (“about a lady boy from Skegness,” apparently) brings us back to the trashy glam sound.

Two of the four here, vocalist and guitarist Marc and lead man Slyder are veterans of LGD, but that only tells half the story. The rhythm section of Ginge and Scruffykid had played with the other two in The Silver Hearts and as a consequence, despite not being original Dreamers you’d never know it.

“Last Great Dreamer” stomps it way around as if it has eaten too many E numbers, and the most recent record’s title track echoes another of those great “lost” 1990s bands, Silver Sun, as it hurtles about its business – finding time to sound a bit like AC/DC  jamming to the Stones while its at it.

Things end in suitably snotty way with “Lady (Don’t Need You)” (sample line “don’t love you, don’t need you, just want you to be my lady”) and in those hedonistic lyrics they really capture the zeitgeist of the show.

With that its done. Last Great Dreamers know that a quick 55 minute knee-trembler of a thing is sometimes all you need. They don’t write them like this anymore – and ain’t that a shame?