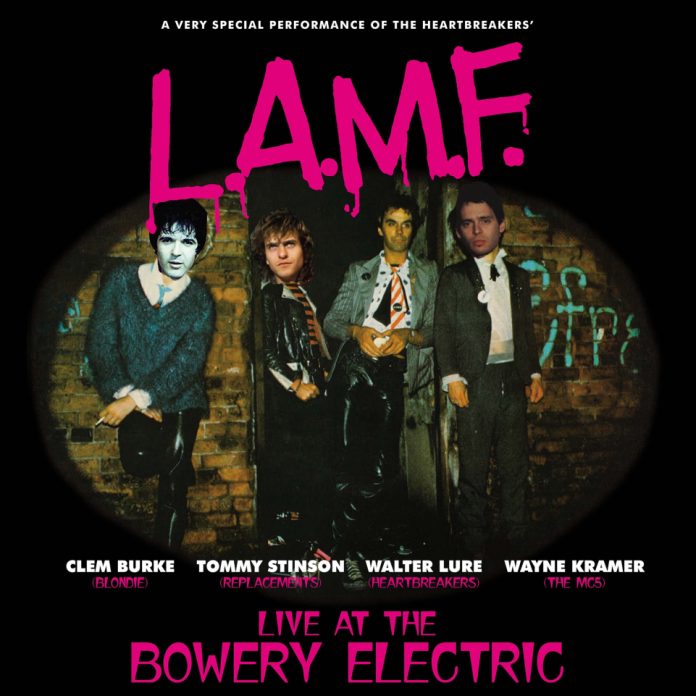 Steve looks back on the re-released album 40 years on

‘L.A.M.F.’ is the album recorded by Johnny Thunders & the Heartbreakers in punk-era London, after they accompanied the Sex Pistols, Damned & Clash on the aborted ‘Anarchy Tour’.  Being ex-members of the New York Dolls they were lauded by the young punks, and went on to record the high-octane rock’n’roll album, in retrospect labelled as a classic:

It’s a shame so many dates of the Sex Pistols Anarchy in the UK tour were cancelled in 1976 as so many more people would have been treated to one of the most amazing punk line ups in history for around £1.50, and been able to hear LAMF played live all those years ago.

For this live album sole surviving Heartbreaker Walter Lure was joined by Blondie’s Clem Burke, The Replacements’ Tommy Stinson and MC5’s Wayne Kramer over two nights at New York City’s ‘Bowery Electric’ club in November 2016, and captured for posterity. Also joining them on stage were guests including Jesse Malin of D-Generate, Liza Colby and the Dead Boys’ Cheetah Chrome.

The tracks are played true to the original album but you can hear the unique style of each of the members of the band. This makes for some amazing versions of the songs as they share vocals and licks with ease and never miss a beat.

This live DVD, coloured vinyl LP and CD follows on from the remastered 40th anniversary edition of ‘L.A.M.F.’ released on 27th October 2017 and the reissue of an extended ‘Definitive Edition’ 4CD box set (and triple-vinyl) of the albums many mixes and demos.  The DVD features bonus material of interviews with all four band-members along with Jesse Malin.

The release coincides with Walter Lure taking his ‘L.A.M.F.’ show on out the road again – this time with the Sex Pistols’ Glen Matlock on bass, Social Distortion’s Mike Ness on guitar & vocals, and again Blondie’s Clem Burke on drums.  They play six dates starting at the end of November 2017 covering US east and west coasts, with gigs in Los Angeles, San Diego, Brooklyn and New York.

Hopefully he will bring this show to the UK soon as this is an amazing live album.