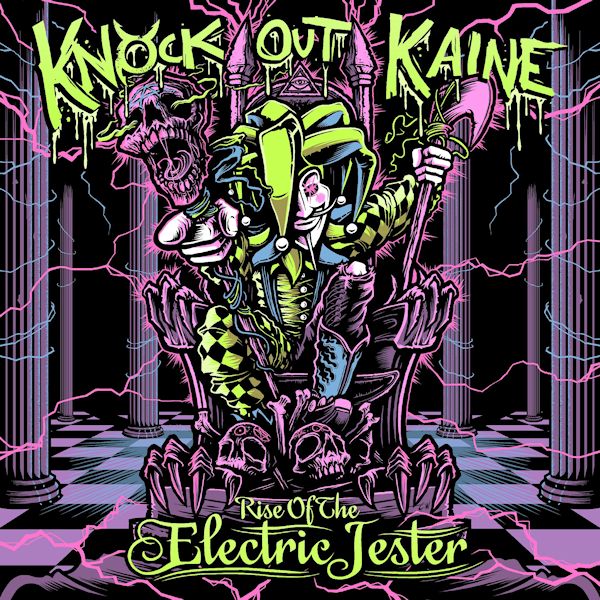 Lincoln rockers find their feet in diversity on new album

MVM saw Knock Out Kaine once. A couple of years ago when Jizzy Pearl brought the final version of arguably the greatest sleaze rock band of all time over to the UK, KOK (do you see what they did there……?) were the opening act. They had quite possibly the longest intro tape known to man, and were good fun. A band better seen live you thought. There was a suspicion that the Lincoln mob were born out of time and, possibly in the wrong country.

But to borrow a line from somewhere, that was then, this is now. And now is very different. Because, with “Rise Of The Electric Jester” Knock Out Kaine have just about nailed it.

It begins with the single. “16 Grams Of Heart Attack” features Hell Yeah’s Christian Brady in the studio and Bruce Dickinson on the video (and any band that can get the singer from the greatest band on the planet interested must have something going for them….) and that track is a bit of a sleazy belter. Which is all very well, but it’s the diversity here that shocks.

“How Would I Know” takes the Beatles and smashes their faces in, “Diamond Blue” is a lilting almost countryfied ballad and “Cascading” is a light, summery and yet swaggering affair, which brings to mind bands like No Sweat from 20 odd years ago.

It’s the choruses on “……Jester” that really hit home “Ain’t Your Kind” is an enormous grooving thing and if the funky “Boxes” doesn’t worm it’s way into your brain, run round like an annoying kid on too much Sunny Delight then really, we are listening to the wrong song. “Flying Blind” is another beauty too, coming on like the type of song that Bon Jovi would make if they weren’t too busy being anodyne and bland these days.

“Because You Were There” has echoes of Warrant’s seminal power ballad “Heaven” and the whole thing ends “One More For The Road”  and with a hook so filthy it’d probably give you an STI if you got too close.

It rounds one of the most unexpectedly superb rock n roll records in ages. If you thought you knew Knock Out Kaine, think again. This is brilliant.