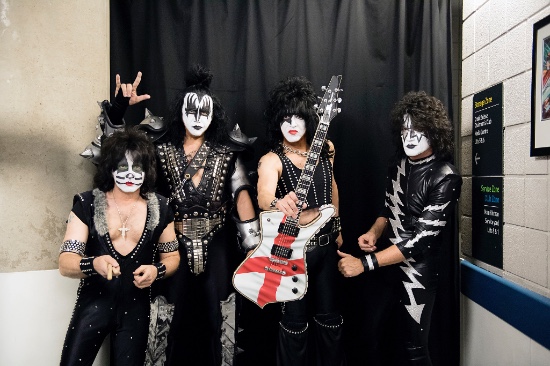 Following the recent tragic event in Manchester the Children’s Hospital has received an out-pouring of support from across the North West and beyond with individuals, schools and businesses wanting to help in any way possible to support the patients and staff at the hospital. This tremendous support has now stretched across the Atlantic with rock stars KISS getting in touch to pledge their support after the awful attack.

Paul Stanley has donated his signature Ibanez PS120 guitar which he was intending to play at their Manchester Arena gig on Tuesday 30th May. The band sadly had to cancel the gig following the attack at the Manchester Arena. The guitar, signed by Paul himself, has never been played and will be up for auction along with VIP tickets, backstage Meet & Greet and photos with the band backstage for four people to a KISS gig anywhere in the world.

Paul Stanley said: “We were devastated by the heinous attack in Manchester Arena and had to do something to support the city. Royal Manchester Children’s Hospital’s incredible work with children was never more evident than after this horrific event. We are humbled to be able to give something to support them in their ongoing efforts. Knowing that the money raised will go towards purchasing life-support ventilators, our prayers and wishes will continue to help both those affected directly by the attack, and beyond. This night will give everyone an opportunity to do their part in raising as much money as possible for an incredibly worthy cause.” 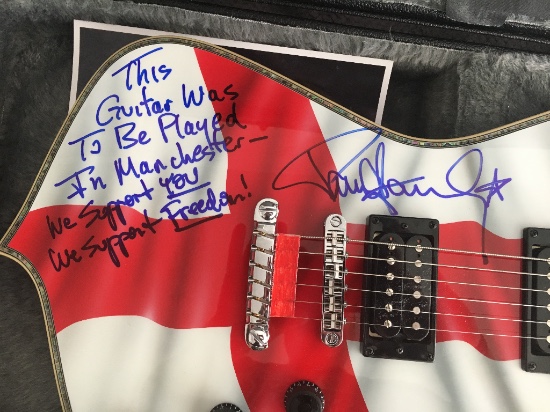 This phenomenal prize will be auctioned off at the Red Sea Pedestrians (RSP) 10th Anniversary Charity ball in aid of Royal Manchester Children’s Hospital, which will be held on17th March 2018 at the Lowry Hotel. The RSP Charitable committee have supported Royal Manchester Children’s Hospital for a number of years with funds raised for the charity totalling to £827,381 since 2011.

A total of £740k is required to ensure the unit is able provide 26 cutting edge life support machines. The new state-of-the-art life support machines are the most advanced mechanical ventilators and the very real impact they will have on the quality of patient care, and the benefits it will mean for medical staff is considerable.

Maurice Watkins CBE, Chairman of Royal Manchester Children’s Hospital Charity’s fundraising board added: “We’re delighted that KISS has donated this incredible prize to be auctioned at the RSP Charity Ball and want to thank them for their tremendous generosity. In recent testing times staff at the hospital – just like the city of Manchester – pulled together to make sure the young victims from the attack got the best possible care, as quickly as possible. The new ventilators we are fundraising for will ensure that the medical teams in our Paediatric Intensive Care Unit can assess a patient’s condition faster and more accurately, resulting in more effective treatment and care at a time when rapid reaction to a patient’s condition is crucial.”