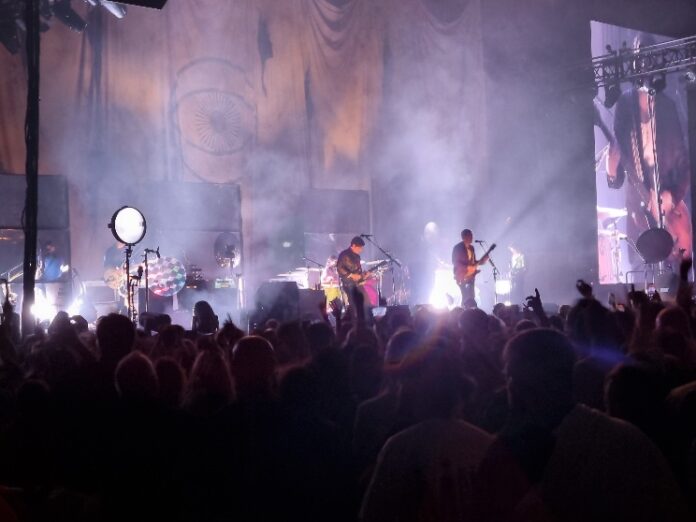 Through the miracle of the internet, I can tell you that it was June 27th 2003 that I last saw Kings Of Leon.

That night they were the hairy, raw, southern-tinged garage rockers with a debut album to die for. It was abundantly clear that night that this was a band that was going to be huge.

Fast forward almost 19 years, and there’s 12,000 people at Resorts World Arena. This show, essentially, is like one of those open topped bus parades that sports teams have when they’ve won stuff. The Followgill’s are on – as Caleb, the lead singer puts it – “the first night of our first proper tour for ages. I’d doubt it could have gone any better.

For two hours and 26 songs, the four piece (fattened up to six here) are the masters of all they survey, but they are a band that looks forward. Underlined by the fact that they kick off here with “When You See Yourself, Are You Far Away”, the album they put out last year (there’s a good smattering of tunes from it punctuating the night).

Another new song “The Bandit” is added second too, and watching them, you are struck by what an oddly incongruous arena band they are. There is nothing remotely flashy about them, nothing remotely “rock star” about them, indeed they largely stand in the shadows, lit by their incredible light show.

And yet, my goodness, their songs have connected and then some.

“Taper Jean Girl” (from their second record) sees a more conventional arena show breaks out. The solo soars, and an example of their rather unique way of doing things has “Knocked Up” as the oddest ballad you can conceive of.

For all that Kings of Leon do it their own way (and more power to them for that) there is, after all, only one way to get this big (and make no mistake Kings Of Leon are massive – look at the cross-section of people here. Give them songs they love. Pretty much everything here is anthemic. “On Call” and “Pyro” almost casually fill the place, but what is so pleasing about them, is that things like “Closer” do the same, despite being oddly off-kilter.

Normally these things race towards the end, this one doesn’t. It carries on in its own way, even “Molly’s Chambers” (the only one that they played 19 years ago that is with us tonight) is no longer the raw upstart. “Milk” makes a singalong out of the words “kill me!” while “The Bucket” is another from the dim and distant that belongs.

They end with “Use Somebody”, perhaps the most anthemic of all the anthems (up to that point anyway) but that only ushers in a lengthy encore. “Supermarket” begins acoustically, but the band joins halfway through, and it’s fitting too, given that this isn’t really a stripped down show.

“Way Down South” is a highlight, as is “Crawl”, but that is all very well. There’s one left, and you me, next doors dog and billions worldwide know what it is too. As a shared experience its right up there.

And that, really, is the point. I am not going to claim I know all these songs. I am not going to claim I am going to listen to them tomorrow, but as someone puts it, who goes to far less gigs than me: “Isn’t it lovely to see everyone happy after Covid?” and yes. It is. Kings of Leon gave 12,000 people the time of their lives here – and you cannot say fairer than that. Beyond the name and the band members, they might not be the same band they were 19 years back, but they belong to everyone now.