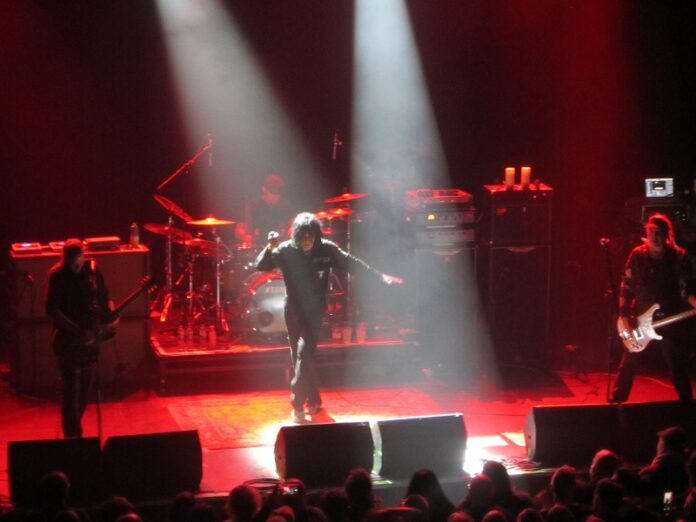 It`s over three years since I last saw Killing Joke on what was then the `Laugh At Your Peril 40th Anniversary World Tour` at this same venue and forty one years since I first witnessed  their power and intensity in a live setting.

First up tonight is Anglo – American quintet The Imbeciles whose album `Imbecilica` came out last month and was indeed produced by KJ`s very own Youth. We get a few cuts from this album tonight as the guys kick off  with the rolling `Name Of the Rose` before the edgy rock out of `It`s Not About You` is belted out. We have the catchy `Tiny Blue People` a quite grungy number about the duality of American middle-class society and the delightful psychedelic earworm of  `You`re Gonna Wanna`. The mid paced and quite dreamy `I Won`t Let You Down` is shared before this half hour set is closed out with the blistering `I`m Not the One` The lady next to me said these sound a little like Queens Of the Stone Age and they probably do a little on reflection, which is no bad thing. I think they shouted something about being back real soon and on the strength of tonight`s performance it`ll be a gig that will definitely be on my radar.

What I’d call the classic line up of Killing Joke Jaz Coleman, Kevin “Geordie Walker”, Youth (Martin Glover) and Paul Ferguson hit the stage and it`s straight into `Love Like Blood` which was a top twenty hit which had the sadly missed local lad Paul Raven on bass. I saw Paul a few times when he was in probably Wolverhampton`s  first punk band Neon Hearts so it was quite moving to hear the band open with this number. `Wardance` and `The Fall of Because` sends this packed crowd into a frenzy and i`m glad i`m now too old to be in the middle of the mosh circle that formed at the front. The potency continues with the pounding  `I Am The Virus` and the more sedate but no less powerful `Requiem` as Jazz commands the audience with his menacing presence as his stalks the stage.

The show continues with a mixture of tracks from EP`s and albums across the band`s career with some numbers I really love like `We Have Joy` from Revelations, the hypnotic `Turn to Red` and the ferocious `Loose Cannon`. They close out the gig with two absolute belters with `The Wait` and the potent `Pssyche`.

We don`t have to wait long before the guys return and offer up the strangely captivating and almost unrelenting `The Pandys are Coming` and the wonderfully mesmerising `Change` which takes on a whole new dimension live. We head home with the stunning `Pandemonium` ringing in our ears and our subconscious. I was still humming “I can see tomorrow, I can see the world to come, I can see tomorrow, Hear the pandemonium” on the bus home half an hour after the show had finished.

As I said last time and maybe every time I see Killing Joke and I still stand by it. Killing Joke gigs aren`t just a gig but an event, a coming together of like-minded people to enjoy an evening being in the presence of a powerful, menacing, entrancing, and brooding cacophony of music with intriguing and thought provoking lyrics. There is no other band to me who come anywhere near.

Long may this continue.