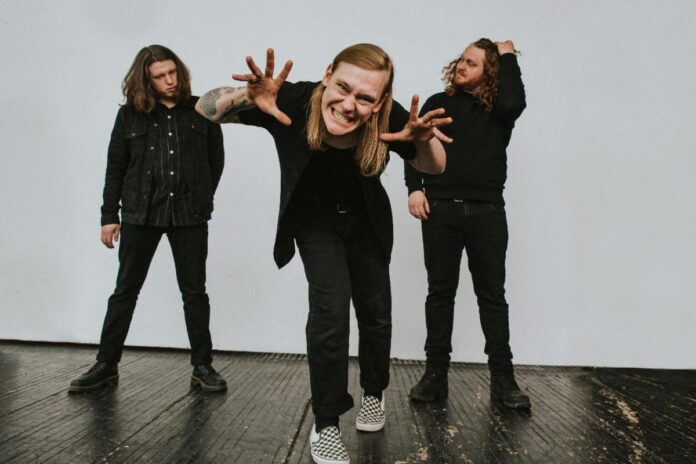 Rock trio Excuses Excuses pair a blistering youthful energy with an attention to the finest details of songwriting, they come armed with a lawless desire to make a true believer out of everyone in the room with their deep, introspective lyrics, jaw-dropping emotion, and melody-heavy songs. As thought-provoking as it is intense, the power of their live show unites and captivates audiences worldwide, and the title of their latest offering Listen Up!, is out now as much a call-to-arms as it is a visceral decree.

The band share the video for their album’s latest single “My Nicotine” – a dark and blistering track with a video to match. About the song singer Kyle shares “When we were recording this track, we knew there was something special about it as soon as we heard it through the studio speakers. It was almost haunting how we all looked around to each other as the first chorus hit with our jaws wide open as if we were all thinking “did you hear that?!?!” I think it was a big turning point for the recording of our album, because that was the moment we realized we had something much more special than just a collection of songs on our hands. We had a real RECORD, and nothing can recreate how good that felt.”

LISTEN TO LISTEN UP!

The band are currently out on the road in support of Listen Up!, playing shows across Ontario and eastern Canada. With stops in the east coast including shows in Charlottetown, Saint John and Halifax under their belts, the band are back in Ontario for a string of dates in Oshawa, Windsor, London and Guelph upcoming. Upcoming dates below.