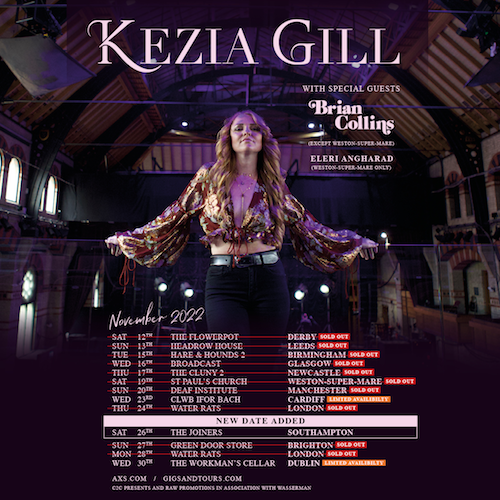 Written by Gill with Kaity Rae, ‘Like I Did Before’ is the first new music to be shared from a forthcoming album, and marks an evolution in the rising star’s sound, bringing in sweeping, piano-led production while retaining the emotive storytelling that has been central to her success to date.

“This song is totally different from anything I’ve previously released” explains Gill. “It’s a song that I’m extremely proud to have co-written and I feel it displays a whole new side to me as an artist.”

Tomorrow (22/10), she joins a lineup of Nashville talent for a one-off Country Music Week Hub songwriter’s round at London’s Bush Hall, alongside Caitlyn Smith, Breland, Elvie Shane and Matt Stell. Next month, she will be kicking off her first ever UK headline tour, presented by AEG,  in her hometown of Derby. Due to phenomenal demand, with dates already sold out in London, Derby, Leeds, Birmingham, Glasgow, Newcastle, Weston-Super-Mare, Manchester and Brighton, Gill has added an additional date in Southampton, and limited tickets are still available in Cardiff and Dublin here.

“It’s been a dream for so many years to put on my own headline tour, and to see how well it’s been received and how many people are excited to see the show just fills my heart. I cannot wait to get out on the road” adds Gill.