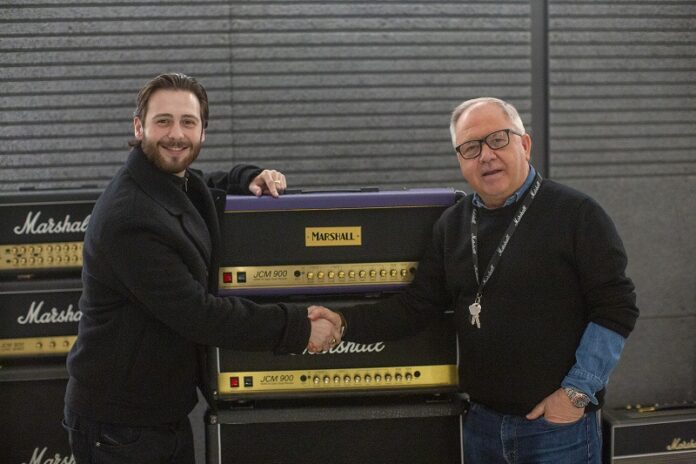 Named as one of the ‘Top 10 Blues Guitarists In The World’ and heralded by Classic Rock as “the future of Blues“, Laurence Jones, a long time user of Marshall amplifiers, has been welcomed further into the family today as he signs a brand new deal with Marshall Records.

With influences that draw both towards UK Classic Rock and its US counterparts, Laurence Jones creates an excellent symbiosis of both sides of the genre that fans of all ages can enjoy. Recently having acted as direct support to Status Quo, Laurence Jones begins a brand new stage of his career uniting with Marshall Records and has just finished working on a brand new album at the Marshall Studio in Milton Keynes.

Regarding the signing Laurence Jones had the following to say:

“I’m honoured to have signed with ‘Marshall Records’.  I’ve recorded 10 original tracks with my band at ‘The Marshall Studio’, Milton Keynes, UK in February 2022. To join the Marshall legacy is a dream. I’m proud of the album we’ve made together on the legendary “Tattoo You” (Rolling Stones) mixing desk… Marshall have given me the support and platform to create a British Rock crossover album that I’ve been waiting to record. Crafted over 3 years of writing songs. I hope you enjoy the next step and I’m excited to see what the future brings and looking forward to sharing it with you all. LJ”

Solidifying his current line up just before the world plunged into lockdown in 2020, Laurence intended to move towards a more Rock oriented direction for his next release and who better to partner with than Marshall Records? Marshall itself celebrates 60 years of being a leading brand in the world of amplification this year.

Marshall Music Director Steve Tannett had the following the say regarding the signing:

“We at Marshall are huge fans of the blues, and when the opportunity came up to work with such a talented guitarist who has played with some of the greats, we knew it was a perfect partnership. Laurence is writing some great material that branches out from previous albums, but stays true to his blues rock roots and excellent guitar playing.”