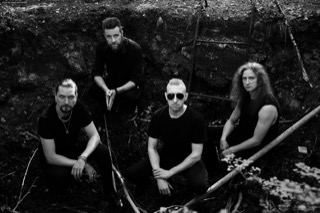 InsideOutMusic recently announced the signing of Anglo-Finnish progressive metallers Wheel, to a new worldwide deal. The band have just completed their extensive North American tour supporting Apocalyptica with label-mates Leprous, and now they are pleased to reveal the next track taken from their forthcoming EP ‘Rumination’ which will arrive on the 10th November 2022. Listen to the song ‘Synchronise’ here: https://youtu.be/uNeRmyjtsQ4

The band comment of the track: “This song has been in the works for the last five years, which even by our standards, is a really long gestation period – I had the idea for C part and the ending back in 2017 and finally came up with thematically appropriate parts to complete the structure at the end of last year.

I was playing acoustic guitar professionally in several bands for years before we started Wheel and I have been considering the possibility of using the instrument in our material again for ages – I’ve just been waiting for a song that I felt was interesting enough to justify its use.

The lyrics are about reconciliation – this is something I could over-explain very easily but I don’t want to make it all about me. I think the subject is something many of us struggle with and although I don’t think forgiveness is arbitrary – there are cases where it is absolutely fine not to forgive; more often than not it is better to let go and to heal than to hang on to destructive anger, guilt and pain. I’ve never found it easy to write positive lyrics but they felt absolutely right for this track.”

They explained of the recent NA tour: “The US tour has been a blast! We literally just finished the final show as I’m writing this (we are now in a van driving to our final hotel) and although we are all looking forward to going home after five weeks on the road, it has been an incredible experience. Apocalyptica and Leprous are incredible bands and people that we consider as friends after so much time spent together on the road and on top of meeting countless fans both old and new, we very much enjoyed getting to hear the bands play every night.”

The band will join Apocalyptica in Finland in November, before hooking up with them again in Europe in early 2023. For the full list of dates, head over to http://wheelband.net/

Following the bands powerful debut album ‘Moving Backwards’ in 2019, they returned in 2021 with the punchy ‘Resident Human’, a record that was packed with vivid vistas of expanding and contracting sounds, whilst honing the bands intensity into something compelling and energetic. The band capped off 2021 supporting Leprous across Europe on their anniversary tour, with extensive live plans in place throughout the rest of 2022 and into 2023, when they will release their third studio album.