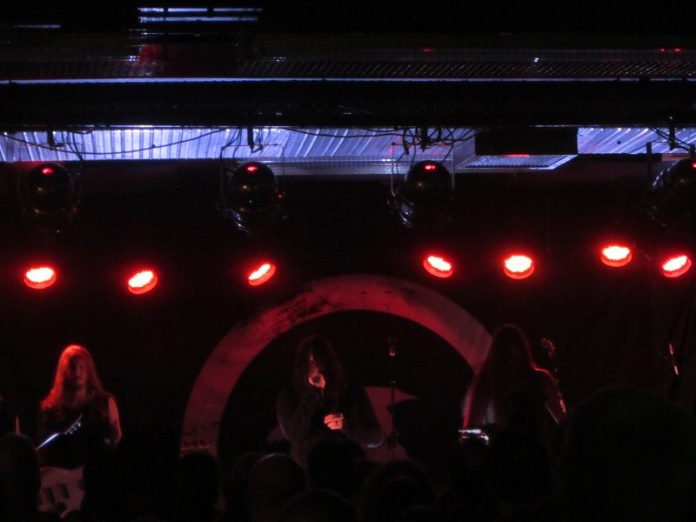 Damian and his “warped perception” are in good heart

It is fair to say that Swedish metallers Katatonia have moved on from being a Doom / Death metal outfit to a more – for my money –  accomplished progressive rock band. This is really brought to the fore with their wonderful and well received tenth studio album “Fall Of Hearts” released mid-2016. The band have added new members since their previous release in the form of Roger Ojerrson on guitar, Niklas Sandin on bass and Danial Moilanen on drums, complementing the founding members Jonas Renkse on vocals and guitar and guitarist Anders Nystrom.

These shows are presented under the banner of “Fallen Hearts of UK and Ireland Tour” so it`s not surprising that a third of tonight`s set is culled from the “The Fall of Hearts” release. The boys troupe onto the stage to a fairly full Slade Rooms and it`s straight into the wonderfully complex `Last Song Before The Fade`. `Criminals` quickly follows before the audience start clapping along to the superbly catchy `Serein.` A couple of more aggressive, meatier cuts are shared with `Dead Letters` and ` Buildings` before the elaborate `Old Heart Falls` is aired. I suppose we must address “The elephant in the room” and admit that the move towards a more progressive sound does lean to some of the songs hinting at Maynard James Kennan`s outfits A Perfect Circle and Tool. But that to me is only a positive.

I should admit I really love `Teargas` and in my warped perception, I see this as a love song of sorts. After a mention that we could all be at home watching the Eurovision song contest instead of here, Jonas admits that he loves the “Viva Emptiness” album and shares `Evidence` and `Ghost of the Sun` with it`s quite menacing and unnerving lyrics of “I trusted you, you lied”

We get a sort of yin and yang effect as the heavier more dark `Soil`s Song` is quickly followed by the much more accessible and dreamy `Residual.`

A song about snow is how `In The White` is introduced and precedes the unsettling `Foresaker.  `Leaders`and the intricate `Passer` ironically the last track on “The Falls…” close out this evenings show.

We don`t have to wait too long before the guys return to the stage and finish us off with `My Twin` `Lethean` and `July. ` s.

It was a gig that I found I enjoyed more on reflection the next day. Maybe it was just the intensity of it all on the night that left me unable to process the performance. This was certainly a show to appease the head as well as the heart. The tour may be publicised as Fallen Hearts but tonight my heart was certainly raised.