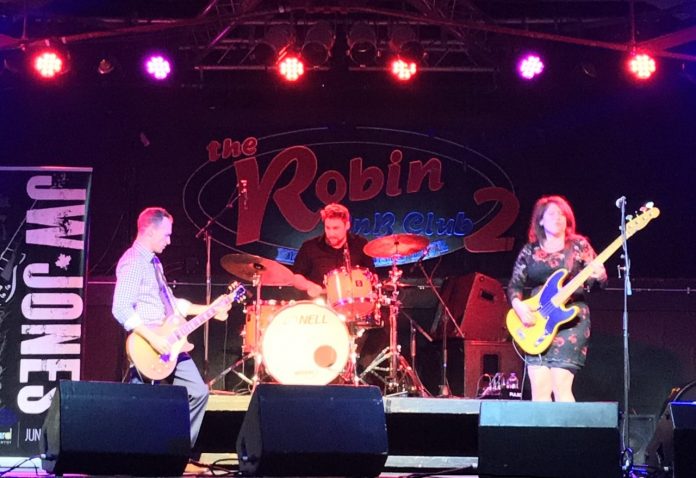 Canadian bluesman chucks in a little bit of everything

JW Jones has, by his own admission brought a few too many CD’s with him to sell on this trip. But he’s nothing if not optimistic. “I have crunched the numbers,” he says. “And I reckon, if you all buy one, then tonight is the night we go platinum.”

Unfortunately, the irony is heavy here. It is one of those freezing cold November nights when the good people of the Black Country have decided an evening with their fire is perhaps preferable to one with a guitarist who is capable of fireworks.

JW Jones’ “High Temperature” record was released in the UK earlier this year, and it is an absolute cracker. He knows it too. He and his band – Laura Greenberg on bass and Will Laurin on drums – begin here with four of its cuts. The instrumental “Wham” acts as an intro, the title track benefits from a scorching lead, The Stones-y licks of “Price You Pay” are effortlessly cool and an absolute highlight and “How Many Hearts” underlines the quality of the album.

But, however good Jones’s original songs are, he has other things he wants to do. A lot of other things as it happens. BB King is clearly an inspiration to him, but his version of “Early Every Morning” brings out another shade, and if “What’s Your Step” from his other album “Belmont Boulevard” is a welcome dip into that record, it almost acts as a palate cleanser here.

Because for most of the rest of the gig Jones either pays homage or jams with the band. There is a funky version of the light and airy “Same Mistakes” from the new record, but it jostles for position with a quite magnificent take on Ben Harper’s “I Don’t Believe A Word You Say” and anyone who doubts Jones is one of the modern great blues guitarists need only watch the solo.

The old Jimmy Rodgers tune “Who’s Loving You Tonight” is tossed out with a loving relish, as the slide guitar is played with a drumstick and Buddy Guy’s “Tell Me What’s Inside Of You” is superb (Jones has performed with the man himself in Chicago a number of times).

It is possible that the gig might have ended then. That it doesn’t is because Jones, Greenberg and Laurin want to have some fun, and happily jam on everything from the James Bond theme, “(I Can’t Get No) Satisfaction” to a load of surf rock, via Hendrix. And if that sounds like it wanders wherever they want it to go, that’s because it does. As they do it, they all swap instruments too (Greenberg is excellent on guitar, Laurin on bass and Jones proves to be a mean drummer) before the sticksman gets to do his own solo, Greenberg and Jones duet on the same guitar  – at the same time –  and plenty more before the end.

A well-dressed, naturally gregarious showman with a frequently beaming smile, Jones is off to meet his people after this. He’s got CD’s to sell, after all. However, something else he said is rather more a summation if him and his band. At Ottawa airport he opines that machines have replaced people. That will never be the case with his music, it is warm and fun, but moreover it is as natural and human as it gets.