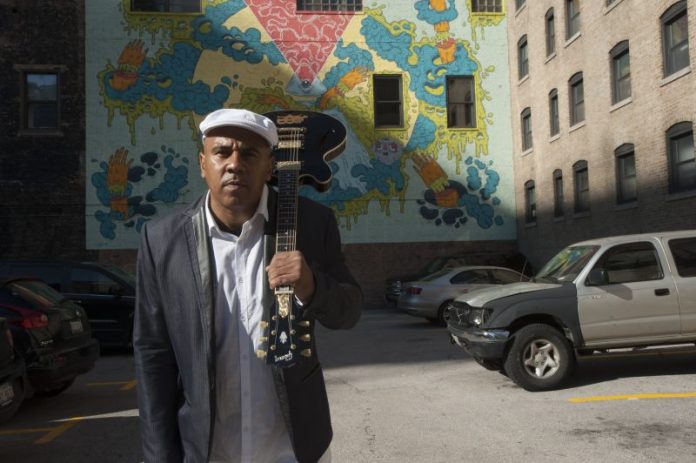 November 22, 2016
Reading time: 5 min.
Facebook
Twitter
Pinterest
WhatsApp
Linkedin
Email
Print
Telegram
Copy URL
By Andy Thorley
First new album in a decade from Chicago blueser
Ronnie Baker Brooks announces release of ‘Times Have Changed’, his first album in 10 years.
Out on Provogue/Mascot Label Group on 20 January 2017.
Brooks, 49, was born in Chicago, and started playing guitar around age six. At 19, he joined his father, Lonnie Brooks who by then had influenced some of the most well-known bluesman of our history: Jimmy Reed, the Fabulous Thunderbirds, Johnny Winter, and Junior Wells. For 12 years the two would tour together, putting Ronnie out front with Eric Clapton, B.B. King, Buddy Guy, and Koko Taylor.
Times Have Changed, Brooks’ first album in ten years, carries with it the weight of grown perspective and time spent perfecting old material. Brooks worked it with Steve Jordan, whose work runs from Keith Richards to Stevie Wonder, John Mayer and Eric Clapton. “I decided to go to Memphis and Nashville for the particular musicians and studios I wanted to engage,” Jordan explained.  “As it turns out, Ronnie had done a few of his previous recordings in Memphis, so he felt right at home.” Collaborating with Jordan represented a lesson in rhythm and blues history. Brooks refers to the director as “a walking encyclopedia of music detail and equipment”, a professor through which Brooks could take that next developmental step. “Once we got the ball rolling, my confidence went higher and higher”, he says. “I’m a better musician for this experience.”
The experience Brooks is talking about is that which came together over the course of a few weeks at Royal Studios in Memphis, the home of Al Green, Syl Johnson and Bobby “Blue” Bland. Jordan and Brooks brought in a mint press of Memphis music royalty: Stax Records staple Steve Cropper (Booker T. & the M.G.’s, Otis Redding, Sam & Dave), Archie Turner (Al Green, Syl Johnson, O.V. Wright), jazz saxophonist Lannie McMillan, and R&B icon Angie Stone. For several tracks, Brooks also enlisted brothers Teenie (guitar), Charles (organ) and Leroy Hodges (bass) of the legendary Hi Rhythm Section, which served as the house band for hit soul albums by artists like Al Green and Ann Peebles. “We used the same mics that Al Green used on his record”, says Brooks. “Matter of fact, we were using much of the same band! It kind of took that vibe.” The first track recorded was a cover of Curtis Mayfield’s Superfly hit Give Me Your Love. The second, Twine Time, the instrumental jam from Alvin Cash.
“To be honest with you, when Steve said ‘Man, we need an instrumental,’ the first person I thought of was Freddie King. Steve wanted something more appealing to all people, not just guitar players. He said ‘What about Twine Time?’’ I said, ‘Is he serious?’ Yeah, Twine Time. But that song was a key to this album. Man, that just lit the fire for this record. It became one of the funnest tracks we did.”
‘Times’ also comes laden with original hits. Five of the eleven tracks were penned by Brooks. Raised on others’ music, he’s always considered the songwriting process to be as sacred. “It’s like having a baby”, he says. “You see it come to life. Once you play it live, it grows even more. That was the most fun part of it, for me: the creative side. Coming up with a song people can relate to, and you relate to, it just snowballs. It’s almost like therapy for me. Like the song Times Have Changed: I wrote that song years ago. I sent Steve my songs and he picked that one. It’s kind of timeless. Every day something’s changing. Now, when I play it live, you can see the effect of it. Initially, it was just an idea: just a riff. Now, this song has influence on people. We were just in Europe this year, after the bombing in Brussels. And we’re playing Brussels. I played that song; people were in tears. It helped them heal.”
It’s on that title track that Brooks brandishes what may be his finest songwriting talent: the ability to humanize social issues and unite different voices into one cohesive thought. That’s no more evident than in the latter stages of the song, in which Brooks deploys his longtime friend, Memphis’ Al Kapone, to drop 32 bars on what the future holds for our people.
“My whole intention, when I started with Golddigger (his 1998 debut album) and up through this one, was to be authentic enough for the older generation but have something that the younger generation could latch onto,” says Brooks. “I try to be that bridge. With Take Me Witcha (2001), I’ve got a rapper on that. On The Torch (2006) we went with Al Kapone. He’s a bridge. He’s a bridge from blues to hip-hop. With music, it all comes from the heart. It comes from the heart and from the soul. In blues, it doesn’t matter what you’re talking about, it definitely relates.
“That was my intention on this record: to build that bridge.”
Ronnie Baker Brooks Online
ronniebakerbrooks.comfacebook.com/ronniebbrooksmusic  twitter.com/ronniebbrooks
Previous article
Violent Videos
Next article
Okay In The UK