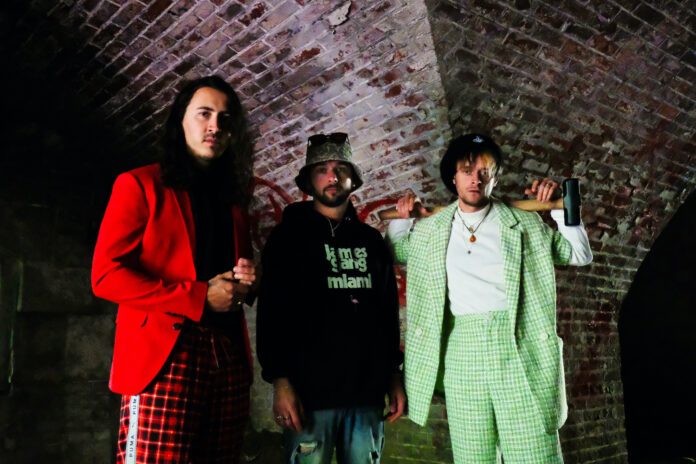 Known for experimenting with a plethora of sounds and styles across their discography, the Southampton-based outfit have made another triumphant foray into the heavy genre with ‘Ursodfrnt’ and it’s accompanying B-side ‘The Other Half’. Toying with playful riffs which explode into gargantuan crescendos, their new signature sound fits like a glove as Mystic Peach continue to call out elements of the modern day in their lyrics.

Speaking about the concept behind ‘Ursodfrnt’, vocalist and guitarist Curtis Gale explains, “This is our perspective of a modern society where we spectate on petty, point scoring and vindictive lay-abouts that lack the initiative to take up a hobby that isn’t scanning strangers lives. A simple, dumbed-down ‘utopia’ that has no room for simple life. So here’s a song to suit the needs of modern life, a verse that promises so much, but the chorus is lacklustre. Senseless lyrics with words that no one knows what it’s meant to mean. A perfect recipe to attract attention of our fellow primates.”

Alongside both tracks which were recorded at The Nave in Leeds and produced by Tom Orrell, the band are also sharing a DIY-esque music video for the lead track. A kaleidoscope of swirling bright colours combined with The Blair Witch Project VHS-style found footage shots, it’s both eerie and captivating in equal measures.

It also comes with the news that the band will be playing shows across the UK and Europe this autumn with a string of newly-announced tour dates. Stopping in Manchester for Psych Fest, Paris, Germany, Rotterdam and Nottingham, there is also a highly anticipated hometown show at The Joiners in Southampton and a stop in the capital at The Grace in London on the agenda too. Well-versed at gigs, the trio have cut their teeth supporting the likes of The Black Lips, Psychedelic Porn Crumpets, Snapped Ankles, Pigsx7, Temples and Crows, honing a seismic live show that has to be seen to be believed.

Today’s new material follows on from last year’s critically acclaimed debut EP‘M?’, which continued to build on their already established cult following by securing support from Fred Perry Subculture, The Line Of Best Fit, So Young, the Daily Star‘s Rising Stars feature, Louder Than War and Backseat Mafia as well as garnering praise from Jack Saunders and Huw Stephens