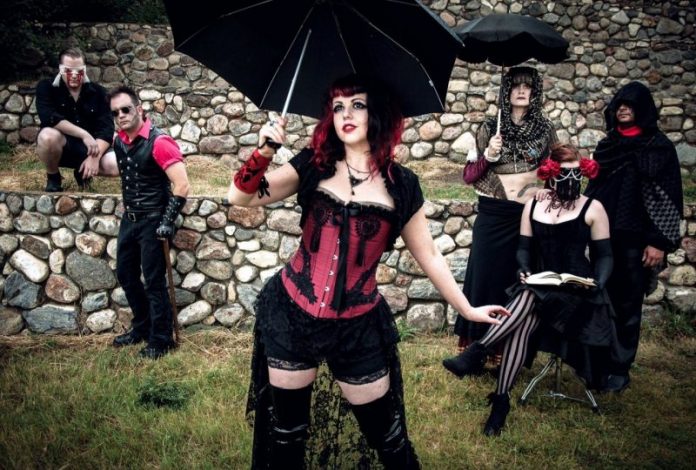 Canadian theatrical goth-punks New Jacobin Club, best known for their darkly flamboyant stage theatrics and sideshow stage performers, are proud to announce their upcoming UK tour to celebrate their achievement as one of Canada’s longest running theatrical rock acts as well as the success of their latest album overseas.  “Soldiers of the Mark” is the band’s 5th full length album in nearly 20 years and has won critical acclaim with its’ apocalyptic feel and rich kaleidoscopic sound that has been described as “a cauldron of classic goth, 70’s rock and power metal” and is dominated by soaring electric cello, theremin and dual male and female lead vocals.

“This is really way overdue for us – this tour. We went through a lot of changes a few years back, just as we started to really gain some momentum with our last album.  But I think it was for the best because those changes prompted us to go ahead with recording “Soldiers of The Mark” before looking at the possibility of touring overseas again.” commented vocalist/guitarist Xerxes Horde (also known simply as “The Horde”).

With a stage show that incorporates everything from torches and swords to glowing masks and armoured corsets, vocalist/theremin queen Poison Candi added that “We still don’t know what we’re all going to be able to bring over for the theatrical aspect of the show, but I promise you it’ll be a good time….we have a lot planned – new songs, new visuals, some acoustic performances, we can’t wait to get over there!

The tour kicks off on June 3 in Leicester at the Firebug and includes a performance at the Splendid Day Out Steampunk Festival and Fair in Morecambe on June 4, as well as confirmed shows in London at the Black Heart (June 8), in Exeter at the Barnfield Theatre (June 10) and Brighton at the Green Door Store (June 13). More concert dates and ticket info can be found at www.newjacobinclub.com/concerts .