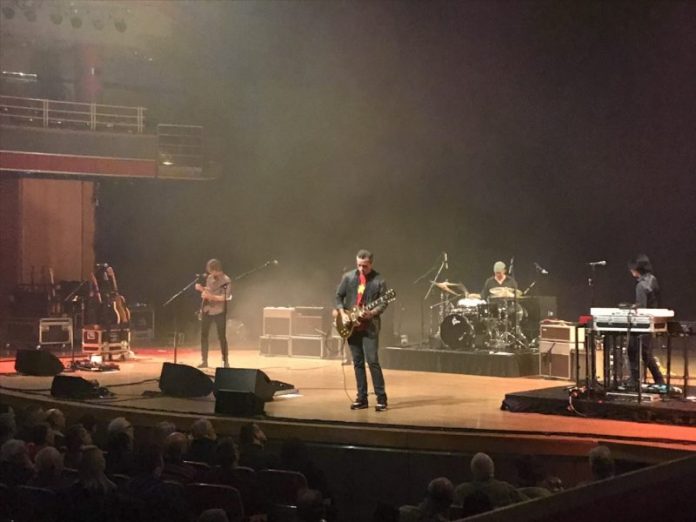 We’ve all been there. It’s 7.56pm. Four minutes before you are supposed to go on stage at the beautiful Symphony Hall in Birmingham and you realise your dress is on inside out. Ok, when we say all we actually mean just Tift Merritt. Given what happened the North Carolina based singer looks tremendously composed. Well she might be too, given that her half hour with us showcases all her skills. A couple of songs to start on the guitar, then she moves to the piano for a pair, the lovely “Good Hearted Man” and the even better “Icarus” (dedicated to those who are guilty of hubris), before she returns to centre stage – literally – for highlights including “Bramble Rose”. At the end though, she shows her true gift as a performer, playing the song “Feel Of The World” for her Great Aunt who recently passed at a grand old age. She does it entirely acoustic, with no mics. Just her and the venue and it provides a superb end to a compelling set.

Happily, Jason Isbell doesn’t have to worry about his dress being inside out, although he too has wardrobe concerns. With it being Halloween and all, his daughter back home is wearing a Wonder Woman costume. The doting dad joins her with a t-shirt (“I never wear a t-shirt onstage”) with the WW logo. Fatherly duties done, it’s down to business and he keeps it real simple. “We’re the 400 Unit” he says as an opening gambit. “We’re from Muscle Shoals, Alabama, and we hope you have a great night.”

Frankly such a notion was not in doubt right from the off. “Anxiety” from the stunning new “Nashville Sound” record is as good an opener as you will find, but it’s far from being the only one.

That new record is well-represented – and with damn good cause. “White Man’s World” is almost nihilistic, (“I am a white man living in a white man’s town, want to take a shot of cocaine and burn it down”) and it is the perfect companion to “Hope The High Road” which casts him searching for a place in the world.

Indeed, the new record keeps on giving classic moments. It’s opening song “Last Of My Kind” is as beaten down by life as you can imagine, “Molotov” is suitably incendiary – bearing something of a resemblance to former touring pal Ryan Adams, and perhaps its best song “Tupelo” is more than a highlight here.

They are so good for two reasons. First Isbell is a brilliant songwriter, but second The 400 Unit are a wonderful band, and one which is a lot more rock n roll orientated in a live environment than in the studio.

There is plenty of material to pick from too. “24 Frames” from the “Something More Than Free” album goes on a voyage of discovery until it finds that “you thought God was an architect, but now you know, he’s a pipe bomb ready to blow” while its title track is a fine affair too.

“Codeine” ramps up the country feel, “Alabama Pines” longs for home and sounds beautifully fragile here, and “Cover Me Up” – written for his wife before she was his wife – is a gorgeous confessional.

Then there’s Drive By Truckers. The band Isbell was in for six years. Rightly he is proud of his work therein, but it shouldn’t define him – nor does it here. That said, “Decoration Day” is a fine song, but not as good, it should be pointed out, as the astonishing “Elephant” – anyone who has lost a loved one to cancer  will drift off into a reverie here. MV cannot be the only one.

Another DBT song ends the set and “Never Gonna Change” allows the band the chance to show their skill on a genuinely screeching rock n roll song, while the encore of “If We Were Vampires” allows the new album to be mined one last time.

A celebratory night ends with a celebration of Tom Petty. “Refugee” is a classic, a genuine copper bottomed stratospheric tune and so it is here too. It is interesting that it ends things, because really, so good were Jason Isbell And The 400 Unit tonight it is as though, in some way, a baton is being passed right before our eyes.