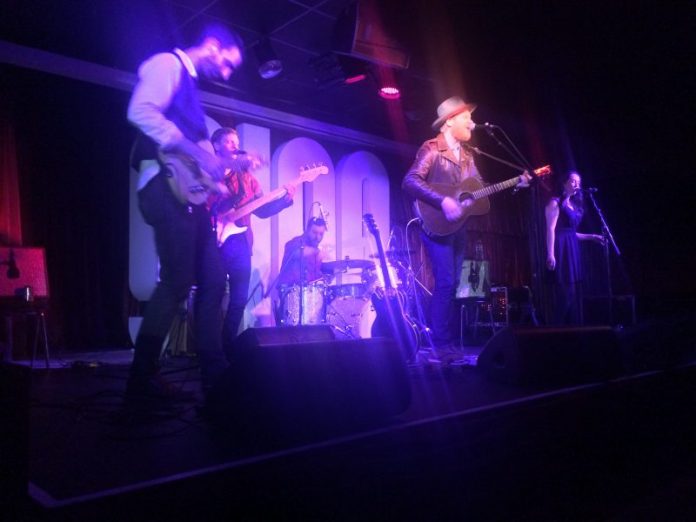 JP Ruggeri, in addition to being the lead guitar player in tonight’s main act, is a singer/songwriter in his own right. A new album about to be released forms the backbone of his set tonight, and his half an hour is impressive, stark, stripped down and rootsy stuff. “Gone Again” and “Don’t Break My Heart” – both sung with Jarrod Dickenson’s wife Claire on backing vocals – are as highly skilled as you might expect from a graduate of the prestigious Berklee School Of Music, and he has a gift for storytelling through his lyrics. The songs he plays suggest that new record might be a fine affair, and the ending “How Can A Man Live His Life Without A Broken Heart?” adds a bluesy side to his work. Back later in the year, JP Ruggeri is clearly one to keep an eye on.

A frequent visitor to these shores over the last few years, Texas native, Jarrod Dickenson was last in these parts just over two months ago. Then, he was special guest to The White Buffalo. There are two key differences tonight. First, he’s here with a band. Second (and this might just be a personal pet hate) there’s no idiots talking all the way through his set, which really marred the WB gig.

It’s a special night for Dickenson too, it is his birthday, and as he observes wryly: “I can’t imagine anything better than playing my songs to a room full of people. …. mind you, it would be depressing if it was just me on my own.”

The bulk of the tunes come from his fine 2012 record “The Lonesome Traveller”, and played by this talented bunch they come alive. Part roots, part Americana and part blues, they veer from dustbowl folk stuff like “No Work For The Working Man” to the vivid imagery of “The Northern Sea” and back again to love songs like “Come What May”.

Indeed, it is impressive just how many different styles Dickenson manages to find in his brew. “Ain’t Waiting Any Longer” jangles like prime Allman Brothers, and “Gold Rush” from the soon out new record is a real dark highlight.

Yet he deftly balances this out with the beautiful “Your Heart Belongs To Me” dedicated to his wife, who performs glorious harmonies throughout the show.

Eager, perhaps, not to play too many songs people don’t know too well, there’s a couple of covers too. Dire Straits’ “Walk Of Life” always manages to sound gleeful and certainly does here, while Guy Clark’s influence on his work is acknowledged with the achingly lovelorn “Dublin Blues.”

He’ll be back soon, no doubt. Jarrod Dickenson, although from Brooklyn these days, seems to live on the road and he’s a troubadour in the great tradition.