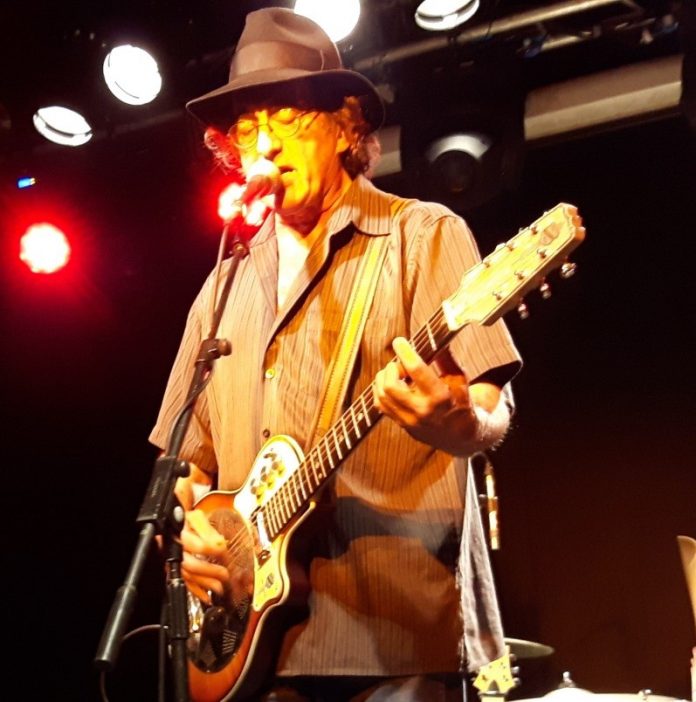 Bernard’s first ever gig review – it is safe to say he had a good night….

Last night James McMurtry was in town – who I hear many of you asking? Therein lies a conundrum; how can any artist so talented and with so much critical acclaim still appear to be under the radar here in the UK? He’s been making great music since 1989 and those that are fans have appreciated his song-writing class ever since. Lyrically he’s one of the modern greats, with his songs offering up small stories of characters and situations from many different areas of the American Dream. He’s not immune to some fairly pithy social comment as well, so a certain Mr Trump may find himself in a song before long.

One of the problems his UK fans were faced with was a lack of UK shows. Indeed he did not visit these shores until 2008 and surprisingly returned the following year for more shows. On both those tours he played to pretty much full venues and it was no surprise to see last night’s show was switched from a smaller venue due to demand.

Since he was last here he’s only released one album, 2015’s ‘Complicated Game’ and tracks from that album featured heavily in last night’s show. However the surprise was how good those particular songs sounded when played live, as opposed to the somewhat muted performances on the recording.

The show kicked off with a rocking ‘Bayou Tortous’ and a great version of ‘Red Dress’. Anyone thinking McMurtry was just another Country strummer would have had their eyes opened by just how hard he and his Band can rock. ‘What’s The Matter Now’ is a new song that I hope sees light of day on the next album, the lyrics offering a scything repost to a complaining partner that are matched to a fiery tempo.

We were still trying to get our breath back when ‘Just Us Kids’ was played and this was followed by some of the new songs. Of these, it was a funky ‘How’m I Gonna Find You Now’ and ‘Copper Canteen’, with its outstanding wordplay, that really stood out.

‘Choctaw Bingo’ is a cornerstone of any McMurtry show and its 8 minutes whizzed by, featuring some great guitar playing from both McMurtry and Tim Holt, who played on a number of songs on either guitar or accordion. Some of the interplay between the two was getting dangerously close to the type of Southern Rock and Country that is finding a big UK audience at present. Fans of Cadliic 3, Blackberry Smoke, Whiskey Myers et all will find much to enjoy in McMurtry’s music, both recorded and live.

A solo acoustic ‘These Things I’ve Come To Know’ calmed things down a little before one of the evening’s highlights. ‘Painting By Numbers’ was the opening track on that 1st album back in 1989 and it’s great to get the chance to hear one of the oldist songs played live that we never had a chance to hear back in the day. The Band played it great and it was a brilliant moment.

As we moved into the home straight ‘Childish Things’ rocked and ‘No More Buffalo’ was both poignant and powerful. The main set’s last song was also from the 1st album, namely its title track ‘Too Long In The Wasteland’. This was the 2nd track of the night where the song stretched out to accommodate more incendiary guitar work, Tim Holt in particular wringing a great solo from his Les Paul.

This is an appropriate time to mention the Band. Since they were last here, they have a new bass player. Cornbread (yes, that’s his name) has fitted in fine, his playing is fluid and he sings some fine backing vocals as well. Tim Holt does not play on stage the entire show but his accordion work on some of the slower numbers gives them more depth and on the louder songs his Les Paul sounds like a Les Paul should, loud and proud. Drummer Daren Hess has been with James for many years and he’s one of those drummers who play with great power without it seeming to be a lot of effort. He sounded great too, as the snare cracked and the symbols shimmered. James’s singing was spot on throughout and he’s also a fine guitar player.

After the rock attack of the set’s final song, James reappeared solo for the encore. ‘Lights Of Cheyenne’ is a great song and a fitting end to the show.

So after all those years without UK shows, was it a case of ‘Too Little, Too Late’ as James sung at one point? The answer is an emphatic absolutely not; it’s my guess that there were 400-500 people at last night’s show, all of whom were enthralled at the Band’s performance – it was outstanding.

How I’m Gonna Find You Now

You Got To Me

Ain’t Got A Place

These Things I’ve Come To Know

For All I Know

Too Long In The Wasteland

Previous article
Prog On
Next article
Descend From Tomorrow