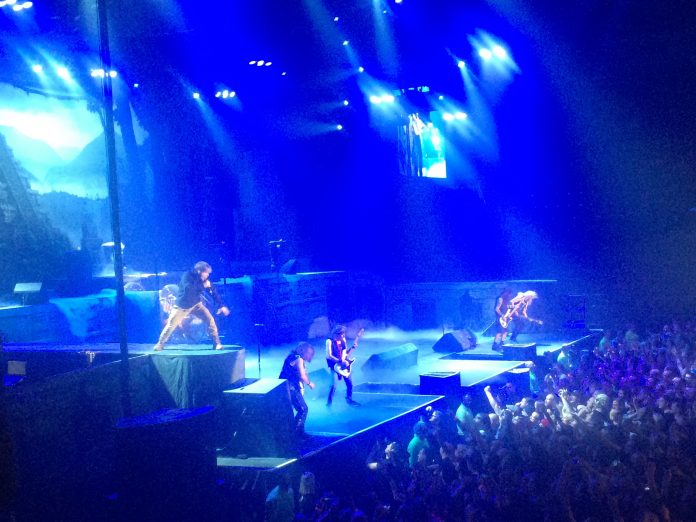 Eddie and the boys open the Book of Souls

There’s a moment tonight, when Iron Maiden play “The Trooper” tonight where it all makes sense. There’s two people in front of MV – a father and son at a guess – who are playing air guitar in unison, and right there, for them at least, nothing Iron Maiden do is anything to do with anything else.

This is the opening night of the greatest band of them all’s first U.K. Tour for six years, and while such a reaction happens at just about every Maiden gig, it does feel like this is one as an anticipation about it. They have, after all – as Bruce Dickinson notes later – played festivals, but not anywhere with a roof on these shores since a couple of shows at the O2 a few summers ago.

There has been contention about this – naturally – but all of this washes away about 8-50 tonight. That’s when the first strains of “Doctor Doctor” hit. Their ring walk if you like, the UFO classic is as much a part of an Iron Maiden gig as any actual Maiden song.

And what of those songs? All Maiden tours have a theme. This one is the “Book Of Souls” album. Six of the songs they play tonight are from this “new” record (such is the paucity of Iron’s gigs these days it’s been out 18 months). They start with two from it. “If Eternity Should Fail” and “Speed Of Light” perform the same duties they do on the album.

Credit to them for not just knocking out the Greatest Hits too. The new songs are given a massive prominence. “Death Or Glory” sees indomitable frontman Bruce Dickinson live up to his earlier boast that “I’m running about like a man half my age with no trousers on” and perform wearing a monkey mask.

Indeed, while the whiff of theatre is never too far away in an Iron Maiden show, then it is particularly overt here.

The new album’s title track is very much the centerpiece of all this and things get violent when Eddie The Head makes his first appearance of the evening and Dickinson adds to his vast array of headgear in “Powerslave”.
If the appearance of that shows there is half an eye some classics, then the dusting off of “Children Of The Damned” is welcome too and shows no one is prouder of their legacy than the band themselves.

The end is the same end that it always is, but just because you know what’s coming, that doesn’t stop it being incredible. “Fear Of The Dark” might be the greatest live song, but the eponymous track which follows – complete with giant Eddie watching over the mayhem – isn’t far behind.

The encore too includes “Number Of The Beast”, a sentimental “Blood Brothers” and “Wasted Years” soars as only it can.

To (almost) borrow a line from that track to pose a question about the band. Are we still living in the golden years? None of them are getting any younger after all, but Dickinson remains uniquely superb – even if his voice is occasionally more laboured than you recall – and no one displays the energy of Jannick Gers and Steve Harris, the effortless cool of Adrian Smith, the smiling charm of Dave Murrray and Nicko? Well, Nicko McBrain was born to play drums. There is no hint of coasting here. No hint that anyone gives anything less than their all.

Of course it is no shock that the best band that has ever walked the earth (MV will not debate this) is still formidable. That’s why they still matter to the 150,000 people that have bought tickets for the shows this month, and what they did tonight – give or take the thought that it took a while to hit top gear – is why they always will.