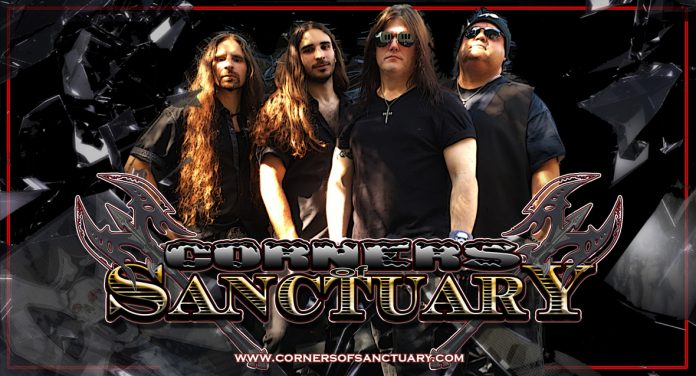 New Wave of Traditional Heavy Metal band Corners of Sanctuary (COS) has announced the official release of their latest music video “Hyde No More”. The song appears on their current compilation album, “Declaration of Metal”, available on Exquisite Noise Records. The new video is the second instalment in the album’s film campaign following this past summer’s “Victoria” release.

“Hyde No More” has also been made available as a free mp3 download.

COS once again teamed up with Philadelphia-area Indie film-maker ZenSay to compile this latest video release. “Hyde No More” marks the fourth time the band has worked with Zen Say to produced a music video.

“There has obviously been a genuine chemistry between us and ZenSay. He really does seem to get what we are looking to capture,” said COS guitarist Mick Michaels. “We are big fans of going with what works,” he added.

“Hyde No More” is a collection of clips from the now public domain 1931 American horror film starring Fredric March, “Dr Jekyll and Mr. Hyde” The film was directed and produced by Rouben Mamoulian. Consequently, March’s dual role as the mild mannered Dr. Jekyll and animalistic Mr. Hyde garnished him the Best Actor Award.

“Since the song had a deliberate meaning and theme, it seemed pointless to work to recreate something that already existed,” said ZenSay. “Utilizing the public domain footage from the 1931 film made the impact of retelling the story from the band’s lyrical perspective much more invoking. Clips were re-sequenced to parallel the band’s version of the classic tale of human duality with evil and virtue,” added Zen Say.

Besides the footage used from the 1931 film, primary shooting of the band was filmed on an outdoor location on the Heritage Trail along the Lackawanna River in Archbald, PA.

“I’m drawn to the nostalgic feel of Hollywood. The look of this classic tale blends seamlessly to the animalistic emotion of the song, intertwining the two nicely… COS Metal meets celluloid macabre,” offered lead singer Frankie Cross.

“Hyde No More” was written by Michaels and drummer Mad T. When asked about his feelings on seeing his contributions put to video, Mad T stated “The video does a great job of blending the dark themes of Jekyll and Hyde with the aggressiveness that is COS.”

Corners of Sanctuary is currently supporting Declaration of Metal with a handful of shows to finish out the year. The band has already begun work on a new album and looks to release it sometime in 2017.

“We believe we are positioned to take the next level with the release of Hyde No More. 2017 here we come. This is just a sample of the new music you will be hearing from COS in coming year,” contributed COS bassist James Pera.
“It’s been a busy year and we are looking forward to focusing on making the new record,” added Michaels.

Fans who would like to support Corners of Sanctuary can do so by visiting: