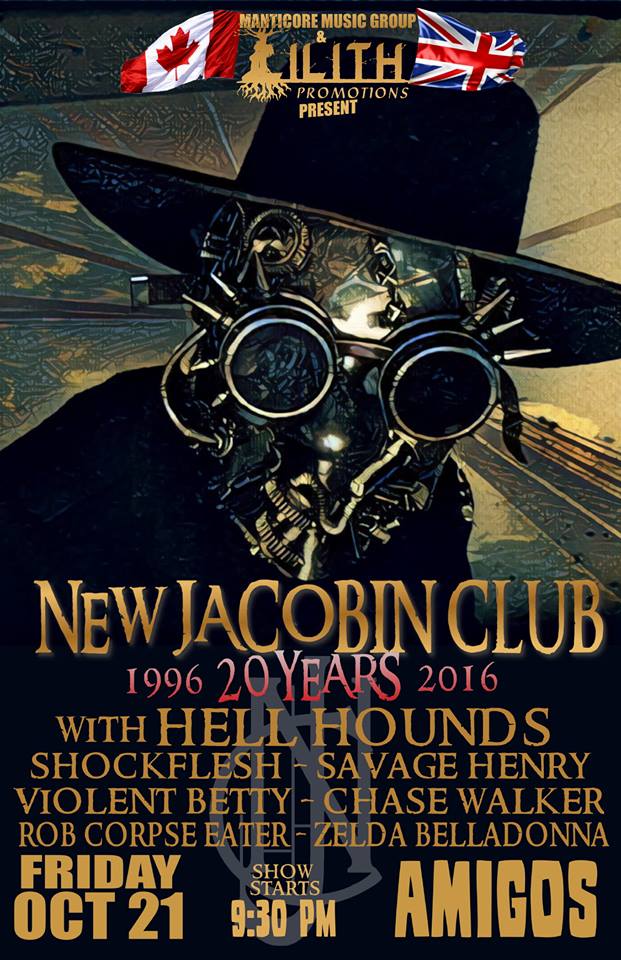 Crossover freakshow celebrates 20 years
During the 20 years that Canadian theatrical art-rockers New Jacobin Club have been  loudly spreading their dark and provocative sounds and stories, the band has survived controversies and obstacles that most performing artists rarely encounter.  From being associated with the Columbine shootings as “goth” artists to nearly being banned from performing in parts of Western Canada, the group fought an uphill battle to prove themselves during their early years when grunge, rap metal and alternative country were what made the music industry tick.  Since then, the New Jacobin Club has gained pockets of cult followers all over the globe, attracting members of various musical and lifestyle subcultures.  Goth, metal, industrial, steampunk, horror rock, burlesque, and freakshow elements have all existed within the band’s artistic palate over the years.
The first NJC concert was on September 28, 1996 in Saskatoon, Saskatchewan. On October 21, 2016, the band will celebrate 20 years of existence with a massive concert in their hometown where it all started. The show at Amigo’s Cantina will feature many guest artists and a few MC’s, all of whom have special ties to the band. In addition, theoriginal trio that made up the NJC in the late 90’s will make a live appearance with bassist Lord Une and drummer Elvis Hellfire rejoining The Horde on stage for the first time in 16 years.  The band will also perform in province’s capital of Regina on December 9.
To mark the occasion, the band’s first studio release from 1998, “A Lesson in Mortality,” will be reissued in October as a limited edition 7” vinyl picture disc.  This extremely limited edition item can be reserved by pre-order at www.newjacobinclub.com/picture-disc-pre-order and ships worldwide.
You can see some of the New Jacobin Club’s signature costumes, characters and theatrical flair in their latest concept video, “Into the Fire,” atwww.newjacobinclub.com/videos . Their latest album “Soldiers of The Mark” is available with 5 exclusive bonus tracks at www.newjacobinclub.com as well as on iTunes, Amazon and  most streaming services. The band always has 4 free songs available for immediate download at www.newjacobinclubmusic.com