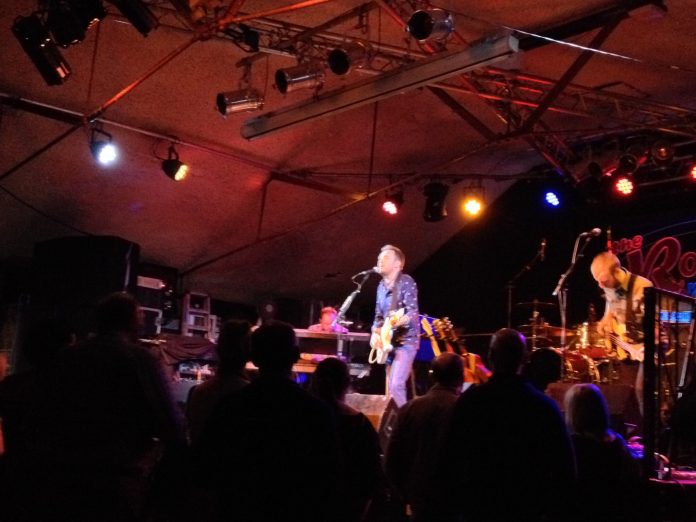 Beginning with Albert Collins’ “The Moon Is Full” presents something of a problem to Big Wolf Band. “We thought we’d start with our best one,” deadpans keysman Richard. Actually he’s doing the five piece a disservice, as their funky blues mix is never less than entertaining. One of those bands who collectively look like a bunch of blokes who have never met in their lives, nonetheless musically, they mesh it together their act is very impressive indeed. Helped by liberal use of Sam Rogers’ sax for added effect, they groove their way through and singer Jonathan Earp has a kind of earthy voice which suggests middle America rather than middle England. Their variety – the take on “Have You Ever Loved A Woman” is a study in misery – together with some excellent, warm playing, allied to plenty of talent,  adds up to the perfect opening act.

With his new album “Politikal Blues” in the bag – his first full length studio work this decade – Stourbridge based blues man Ian Parker might be ready to make up for lost time. Eight years have passed since his stunning “Where I Belong” album in essence began his career in a serious way, and whilst it’s wrong to suggest he’s been away – incessant gigging and the odd live album meant you couldn’t forget him – there is a feeling that phase two begins tonight.

That said, if Parker feels under pressure you’d never know it. He wanders out with his band, says hello to a mate at the front, straps on his guitar and is away with nothing approaching a fanfare and never getting close to ego.

Such a laid back atmosphere was always in Parker’s music. “….Belong’s” title track – played early on – is rooted in what we might call a blues feel, but things are approached in the way that Bob Dylan, say, would take on the blues.

That’s not to say, however, that this lengthy set isn’t steeped in bluesy tradition. An interpretation of Muddy Waters’ “She’s Alright” is tossed in, but it’s beauty is that it’s not trying to emulate anything, rather using the template as a starting point.

But what we are here for is a look at the new stuff and “World Of Pretty Faces” – the first dusted off –  is a groovy affair, elevated by a fine Parker solo.

With a full band tonight, the songs whether new, old – or indeed “indulgent slow blues things” as Parker terms the brilliant “Love So Cold” – have a real depth and with their regular keyboard player unavailable (“he’s on his honeymoon, it seems he had better things to do”) Matt Cox does a manful job of filling in.

Cream’s “White Room” (which sees bass player David Jenkins take the mic) is lovingly played, and has more significance than you might guess with Parker explaining that he first played with the men on stage 20 odd years ago in a Cream and Hendrix covers band.

“Long Done Gone” from the new record, is full of rootsy authenticity, and swampy slide guitar strum, and his cover of Richie Havens’ “Freedom” (also on “Politikal Blues”) crackles with feeling.

Even amongst what seems like a strong collection of new songs “She Comes Back” particularly impresses. Funky and harmonic, it pulses with urgency and will become a real favourite.

One of his older songs “Don’t Hold Back” closes the set magnificently. Dark yet uplifting, it builds and sweeps everything along and for perhaps the first time tonight things feel raw and visceral.

This is juxtaposed beautifully by the first encore of Leonard Cohen’s “Hallelujah” which sees Parker solo with his acoustic. It’s fragile and gorgeous.

The rest of the band return for another Cream track, “Politician,” and a simply magnificent version of “Little Wing” before the end, as the curtain is brought down after very nearly two hours.

Album launch shows are always difficult beasts. By their nature no one knows the new songs and getting a vibe can be hard. Ian Parker could have faced a touch of that tonight. However, by and large he and his superb band, completed by drummer Chris Finn, proved that good tracks can overcome whatever barriers exist. With the general election just four weeks away, “Politikal Blues” looks set to become a real vote winner.