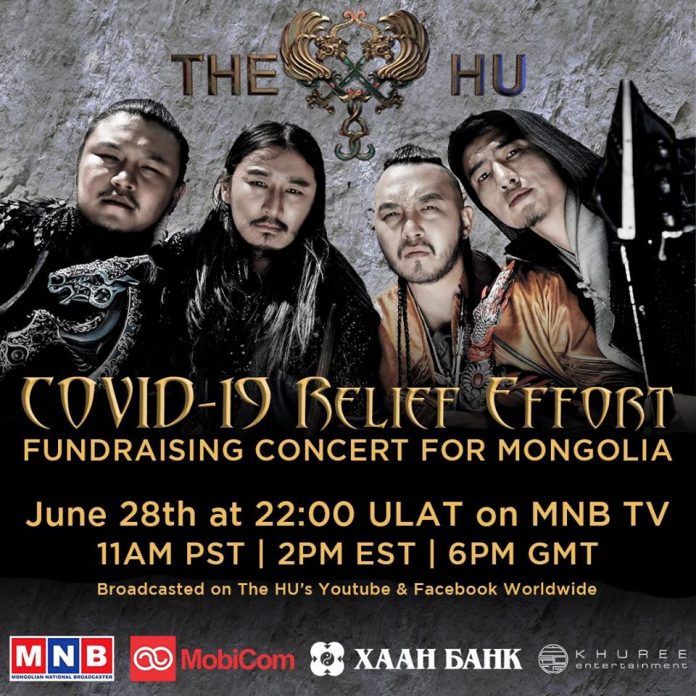 The HU are taking part in a televised charity concert, filmed last weekend and airing on Mongolian TV and on their YouTube/Facebook pages on 28th June, in aid of the Mongolian Covid-19 relief. The concert is the band’s homecoming show after their sold out world tour, and will be made available for a global audience on their YouTube and Facebook channels at 6pm UK time. It was important to them to take part in this concert, filmed from the White Rock Centre in Ulaanbaatar (with no audience present) to help those in Mongolia affected by Coronavirus.

After being stranded in Australia for months after their world tour was cut short, and a long journey back via South Korea and Germany, they ended up being flown home with help from the Mongolian Government. Once back in Mongolia they spent three weeks isolating in a safe government facility, and then headed home to isolate with their families. It would have been a really tough experience but The HU are a voice of courage, resilience and unity and they supported each other through it, even using their time in Australia to start working on album 2.

Now Mongolia’s biggest band are back to work and want to do their part to help others who have been affected by the pandemic. Gala of The HU says “Let’s beat this pandemic united as one. We will soon reunite and celebrate through music!”

Certainly an unexpected tale, not many bands get flown home by their government… Perks of being awarded the Order of Genghis Khan, I suppose. And not many countries have their biggest musical asset as a throat singing metal-rock band!

The HU’s debut album The Gereg reached #21 in the UK charts, and there’s a deluxe version coming soon on 10th July.