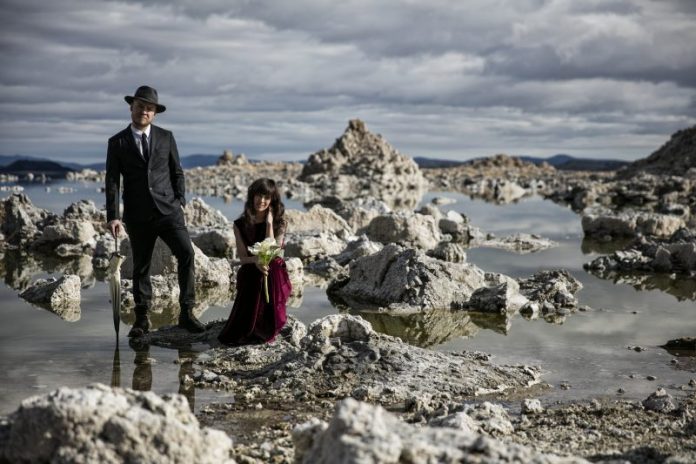 We may not all share the same beliefs, but people are still more alike than different. No matter if you’re in San Diego or South Africa, living 10,000 years ago or today, we all look up to see the same sun and same moon. We are all connected in one way or another. This message of unity beats at the heart ofLittle Hurricane’s latest release, Same Sun Same Moon.

Their story began in San Diego, where Little Hurricane formed. Having recently resumed playing drums after an eight-year hiatus, CC placed a musicians-wanted ad on Craigslist. Among the myriad of respondents was Tone, a studio engineer who’d worked with artists ranging from John Paul Jones toGwen Stefani. The two musicians were neighbours who had never met, and bonded over mutual interests including the blues, unusual and vintage gear, and their individual experiences playing in high school jazz bands. A year later, Little Hurricane won three San Diego Music Awards, including Album of the Year for 2011 debut Homewrecker. Little Hurricane’s explosive live show soon landed them slots at major festivals including Austin City Limits and Lollapalooza, and garnered media attention from outlets including Rolling Stone, which profiled them in an extensive behind-the-scenes piece at SXSW 2012.

During the writing process in their studio, built on ancient Native American lands in the mountains East of San Diego, Tone was overcome by a powerful force that led him on a 28 mile barefoot journey that nearly took his life. One ominous mountain, at an elevation of over 3,400 feet of rocky terrain, called to Tone: “Something called to me to go to the top of the mountain. I had no other response but to listen” he explains. He left without telling a soul and foregoing any food or water.

With plans for writing that day, CC was at the studio waiting for Tone to arrive, but he left no clues to where he was. “I figured he went for a short walk, but as the sun was beginning to set I started to panic. Then I noticed Tone’s camelback on the table. He always brings it along for water on hikes.”
By the time emergency services arrived, the sun had completely set. With temperatures dipping to the freezing point and limited visibility, the icy cold and rough terrain deterred police from being able to continue their search by foot. An Emergency Services helicopter was called in, but to no avail. The rocky trail and the cloak of darkness made it impossible to find Tone that night. CC had begun to organize a search party to set off at dawn. Unexpectedly, just before sunrise, Tone returned; 17 hours after he left. The trek left him hospitalized with kidney failure, frostbite, and injuries so severe he was unable to walk for over a month. Several shows were cancelled, and the album was put on hold.

With so much history behind the band, their new record is a nod to its predecessors Homewrecker(2011) and Gold Fever (2014) while taking a resolute turn with its intention. These twelve new songs retain the honesty and immediacy of Little Hurricane’s earlier work; check out the gritty “Bad Business” (featured in PlayStation’s MLB The Show 16) and the driving instrumental ”March of the Living.” Yet they also incorporate new timbres and a broader emotional scope, changes that underscore the band’s desire to transcend its dirty blues roots and connect with a wider range of music lovers.

This evolution is especially evident on the album’s first single “OTL”, a love song woven from understated keyboards and intertwined vocals. Married in summer 2016, the creative partners elected to openly share their happiness with listeners for the first time.

To hear more about their journey, tune in to their latest album out April 14th via Mascot Label Group and come see the band live during one of their live shows in the US and Europe.