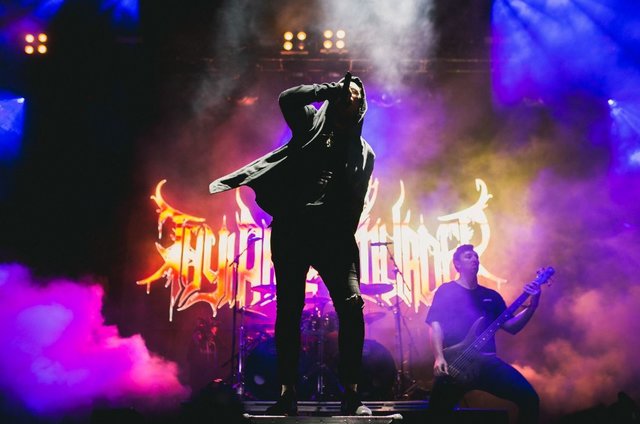 Australia’s premiere incendiary extreme musical export, THY ART IS MURDER, recently welcomed back vocalist C.J. McMahon back into the fold. The band welcomed him back as a surprise onstage at their recent Unify Festival performance in Australia. Check out footage of the band performing “Holy War” at the event, here:https://youtu.be/EsxWcNlbTJA

McMahon recently offered a brief statement, which didn’t mince words around the reasons for his departure:
“I was a drug addict, I was a broke musician, and I had some fucking issues. I got married, I did some fucking soul searching, and now I’m back to take over the world with my fucking brothers.”

Get “No Absolution” here: http://nblast.de/TAIMIT

THY ART IS MURDER latest album, Holy War, landed at #82 on the Billboard Top 200 in its first week of sales. This marks the first time THY ART IS MURDER has made the coveted chart. The band saw similar success in their homeland where they reached #7 on the Aria Charts – the highest position ever for an Australian extreme metal act.

Holy War was produced and mixed by Will Putney (SUICIDE SILENCE, EXHUMED, THE ACACIA STRAIN), and is the band’s second release for Nuclear Blast Entertainment. The controversial album cover and packaging photos were shot by the band’s long time photographer and friend, Thomas Savage.