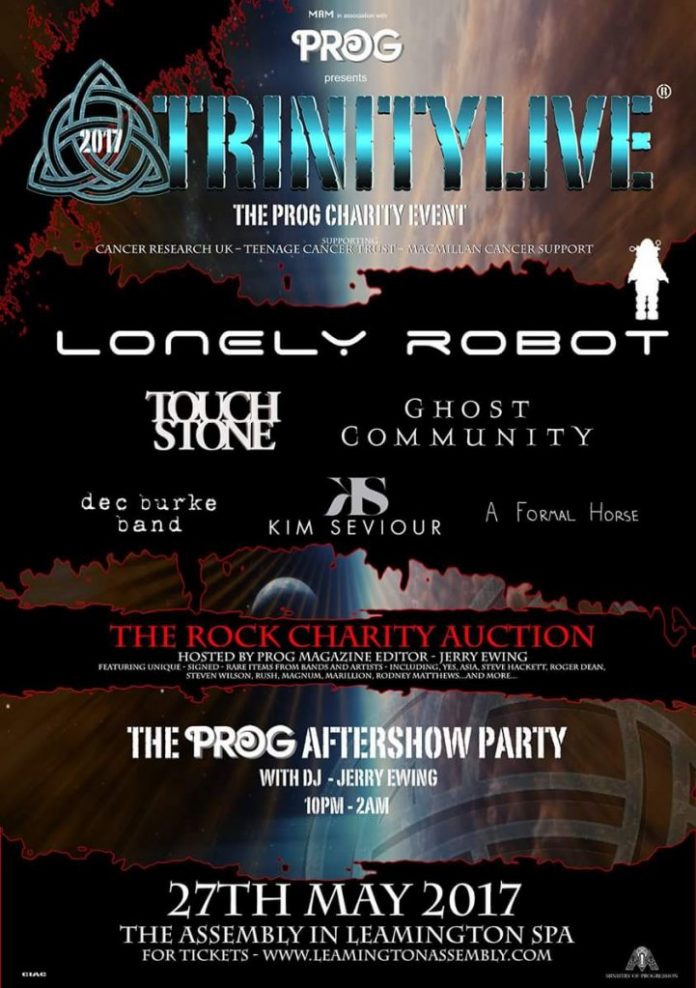 It is with great pride and excitement we announce that Trinity, in association with Prog! Magazine, is back with a bang on Saturday 27th May 2017. Put the date in your diaries folks… and get ready to rock in support of some fantastic causes!

The venue will again be The Assembly in Leamington Spa. We have the line-up complete, and we have many special events going on throughout the day: charity rock auction and raffle, both afternoon and evening live music sessions and the unparalleled Trinity After-Show Party

We are delighted to announce that the headline act will be the amazing Lonely Robot. This is an exclusive, as it will be first public performance of the all-new Lonely Robot II album. As many of you know, their performance in London in December 2015 was a sell-out and featured a fantastic stage show; a similar space phantasmagoria will be brought to the Trinity stage… something not to be missed!

To complete the bill, we can also announce that Touchstone and Ghost Community will be part of the evening session: Touchstone filling The Assembly with their rocky, riff-driven signature sound including tracks from their excellent EP Lights From The Sky, while Ghost Community will bring you the delights of their recently released, equally excellent, CD Cycle of Life; all-in-all, three rocking bands to get you dancing in the aisles.

The after-show party will have a very special guest live performance, plus one of Jerry Ewing’s infamous DJ sets: a fantastic way to end a fantastic day with the bands and the organisers! Jerry will have you bouncing around that dance floor, we promise

With your amazing support, the first Trinity show enabled the organisers to donate £9,000 amongst three cancer charities, and this year we want to smash that figure out of the ball park. Each and every one of us has been exposed to someone who has dealt with cancer, so let’s pull together and help raise some serious money to allow these amazing organisations fight this vile disease.

TICKETS AVAILABLE NOW: get them while they’re hot… and please, let’s light up social media and make this an event that will shine brightly for years to come and which will continue to raise more money every year it takes place. Through music, through love, through adversity… together we can all make a real difference.