“We’re The Damned and this is what we do” so says Captain Sensible, right before the band casually knock out “Street Of Dreams” to begin their set tonight. Give or take the one new song, “Standing On The Edge Of Tomorrow”, this is 45 minutes of their Greatest Hits if you will (“you probably don’t know who we are, but here’s one you might know – it’s a cover of course” deadpans leather clad frontman David Vanian, before “Eloise”) and they pull it off with all the sass, skill and aplomb of a band that’s been doing this for 42 years. Sensible’s lead on “Neat Neat, Neat” is the spirit of rock n roll, and “Wait For The Blackout” gives at least a clue as to where The Wildhearts pinched their riffs from. Better still is “New Rose” – and to be fair even better than the song itself is keyboard loon Monty Oxymoron’s one-man dance during its middle bit. This is all finished off with the polite enquiry from Sensible: “Shall we smash it up….?” And they do. Frankly The Damned tonight smashed it out of this park, that park or any other one you care to pick.

This website has a number of core beliefs. These include – but are not limited to.  1) We’d like to see Shinedown arrested for crimes against music. 2) We’ll defend anything Bon Jovi did up to 1998 to the death 3) We will continue to argue that the Darkness’ first album “Permission To Land” made UK rock n roll fun again. The Darkness played here as headliners in those heady days, tonight they are sandwiched in the middle (“we’re meant to get you warmed up, so thanks to those of you that reluctantly stood up then”, says Justin Hawkins, their singer-cum-force of nature) but they don’t really care. Since their reformation a few years ago, it’s all a laugh. They know this is ludicrous, and its meant to be. They know that starting with a song that contains the chorus line: “we’re never gonna stop, shitting out solid gold,” isn’t mature. They know, too, that having songs called “Japanese Prisoner of Love” and “Buccaneers of Hispaniola” isn’t normal – and that’s why they’re ace. There’s enough of the hits too,  “Growing On Me”, “One Way Ticket”, “Get Your Hands Off My Woman” and the finishing “I Believe In A Thing Called Love” to carry the crowd, but the key to The Darkness is this: “I am going to play you a song you’re definitely gonna know” says Hawkins. And he does: the opening riff to “Sweet Child O’ Mine.” Treasure them, because they’re in on the joke. 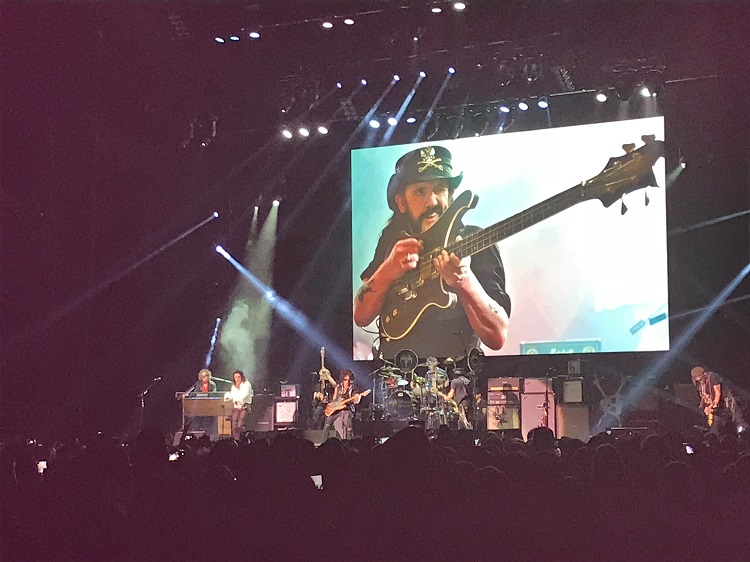 The opening to the Hollywood Vampires show is all you need to know. Stage right as we look emerges and Joe Perry, you know, the Toxic Twin from Aerosmith plays a lick. Stage  left, Johnny Depp does the same. Then in the middle emerges the son of a Preacher Man, radio DJ and pensioner and Alice Cooper gets the biggest cheer of the lot.

The Hollywood Vampires – named after the infamous celebrity drinking club that saw some of the biggest and brightest stars meet – play a lot of covers. They play a lot of songs by artists that are now dead.  But here’s the thing. They also write their own. Which is why this isn’t some freak show where some rich actor and a load of blokes who should know better get together. This is a rock n roll band of the very highest order. So forget the sniping about a covers band. Leave that to the dreary clowns on the circuit, playing shit versions of legendary music to punters who wouldn’t know a good rendition of “The Boys Are Back In Town” from the worst in the world, and revel in this instead.

Because, this needs revelling in.

To be honest, I went in here with some trepidation. I hate – as that last paragraph might suggest – covers outfits with those wacky names and what’s more I genuinely know nothing about films, never watch them, and I honestly don’t think I’ve ever seen a Johnny Depp movie, but even if you judge HV on their music alone, then here, they are incredible.

They start with “I Want My Now” and Alice steals the show. Even without the usual antics, he exudes something that no one else has, likewise “Raise The Dead” is just a classic sounding classic rock song, and “My Dead Drunk Friends” is an homage to what are – essentially – the reasons we are here. The big screen flickers with pictures of everyone from Hendrix to Bonham, to Lemmy and Bowie, but there is nothing morbid here.

Of the covers, “The Jack” is pretty faithful, “Ace Of Spades” – sung here by bass man Chris Wyse – is proof that Lemmy, like Alice, transcends the normal boundaries, and “Baba O’Reilly” gives drummer Glen Sobel – who works with Cooper anyway – the chance to solo.

In actuality it’s the originals that surprise. “As Bad As I Am” written by Depp is superb, Cooper dons his top hat for a menacing “The Boogieman Surprise” before a simple “here’s one by a Vampire that didn’t die,” ushers in “I’m Eighteen” and an entire arena getsit.

That seems to signal some kind of change of gear. Perry takes centre stage for “Stop Messing Around” – one from the Aerosmith blues record – with Cooper trading harmonica licks, Depp sings Jim Carroll’s brilliant “People Who Died” and “Sweet Emotion” jostles for space with Bowie’s “Heroes”.

There’s a southern fried piece of fun called “Bushwhackers” from a new album with Wyse on an upright bass, “Ian Hunter turns up for “All The Young Dudes” and “Train Kept A Rollin’” does its thing. All of which is great, of course, but it’s not “School’s Out” and all the balloons and hoopla that come with it. That is rectified in the encore.

As well as being a wonderful song, it might just represent more here. There is a definite end of term feel to this. Freed from the shackles of the day job, the three main men and all the talent alongside seem like they too are having fun, and the enjoyment of The Hollywood Vampires themselves is infectious and impossible to resist. Whatever misgivings there might have been at the outset are washed away by 90 minutes of pure unadulterated rock n roll pleasure.