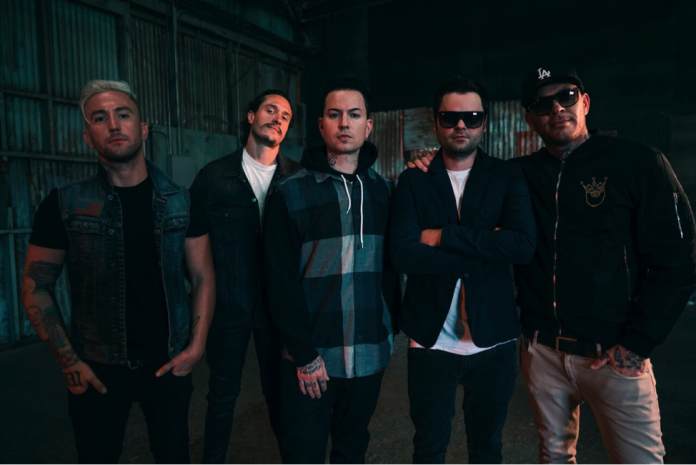 Hollywood Undead have just released a brand new video for “Black Cadillac” from their new album FIVE.  The video and track features B-Real from Cypress Hill and premiered with High Times on Friday.

“We haven’t done a straight up hip-hop song like this in a while so this one made sense and we got B-Real on it who we all grew up listening to. It was an honor to have him participate,” said J-Dog.  “Filming the video was a bitch! Brian Cox had to find a black cadillac in nowhere Minnesota; then we filmed shots in The Rave in Milwaukee, at a cemetery in Pennsylvania and on a green screen in Calgary Canada.  But it was all worth it.”

In addition to the collaboration, Hollywood Undead appeared in a recent episode of B-Real’s Smokebox.  Watch it here.

The band’s new album FIVE was released on October 27th via Dove & Grenade Media/BMG and debuted on the Billboard Top 200 Album Chart at #22 and #7 on the Top Current Albums Sales Chart.  The album is the band’s fifth Top 25 debut overall.   The number five holds a deep significance and for the five members of Hollywood Undead—Johnny 3 Tears, J-Dog, Charlie Scene, Funny Man, and Danny—the digit perfectly encapsulates their fifth full-length offering.  Check out the album here.

“We’re five brothers, and this is our fifth record,” affirms Johnny 3 Tears.  “Nothing gets to the essence of the music like this number does. Numerology has a lot of power. When we said FIVE, it just made sense. The fact that we could all agree on one word codifies who we are. It also nods back to ‘No. 5’ from our first album, because it was our fifth song. Moreover, it hints at this secret society of fans supporting us for the past decade. The number is significant, and this is a significant moment for us.”

The band are currently wrapping up a North American tour that launched in September with Butcher Babies as support.  European dates will begin on January 24th in Glasgow, UK at the O2 Academy.  Tickets and VIP Packages for all shows are on sale now.