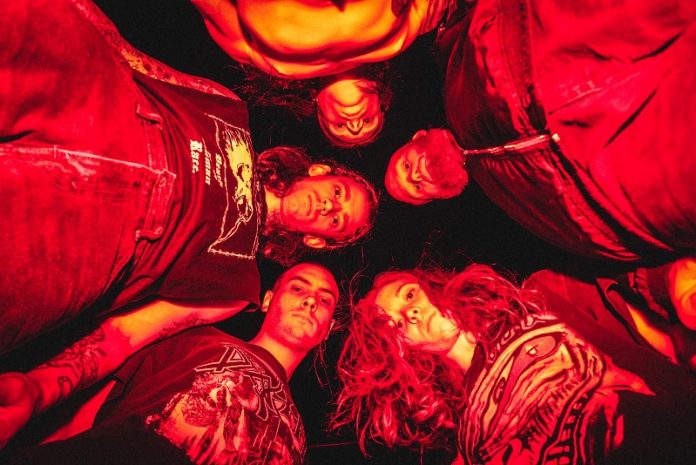 Today, alt-J and Code Orange have released new remixes of alt-J tracks “Adeline” and “Hit Me Like That Snare.”

alt-J drummer Thom Sonny Green has long been a fan of Code Orange’s music, which prompted the collaboration.

Code Orange guitarist / vocalist Shade explains, “I wanted to dismantle the songs entirely and completely rebuild them as if they had come from a different world, and that’s what I did. See the world with Code Orange vision.  No boxes, no boundaries, no fear.”

alt-J was equally excited about the collaboration stating, “It’s not often we get to collaborate with heavy artists so having Code Orange step up and give us two amazing remixes is a real treat. We hope you enjoy them as much as we do.”

Both remixes are available today via Canvasback/Roadrunner Records & Infectious.  Check out the visuals for the remixes created by Dmitry Zakharov (“HIT ME LIKE THAT SNARE” & “ADELINE“). Artwork for each track designed by Shade from Code Orange (attached).

Zakharov previously co-directed with Shade on Code Orange’s animated video for “Mud” which you can view here.

alt-J are Joe Newman, Gus Unger-Hamilton and Thom Green.  Their debut album An Awesome Wave won the prestigious Mercury Prize in the UK and sold Gold in the US and Canada. Their second album, This Is All Yours was nominated for a Grammy for Best Alternative Album.  The band have headlined festivals across the globe and sold out London’s O2 arena and New York’s Madison Square.  Their latest album Relaxer is out now.

Pennsylvania’s Code Orange is comprised of Jami Morgan (Drums / Vocals), Eric Balderose (Guitar / Vocals), Reba Meyers (Guitar / Vocals), Joe Goldman (Bass) and Dominic Landolina (Guitar).  Earlier this year Code Orange released, FOREVER, a jarring and experimental LP which immediately staked its claim as one of 2017’s top releases.  Rolling Stone included FOREVER in their 50 Best Albums of 2017 So Far, while The Fader featured Code Orange as one of their 13 Artists You Need To Know About In 2017. The band recently appeared on the front covers ofKerrang! and Revolver magazines.