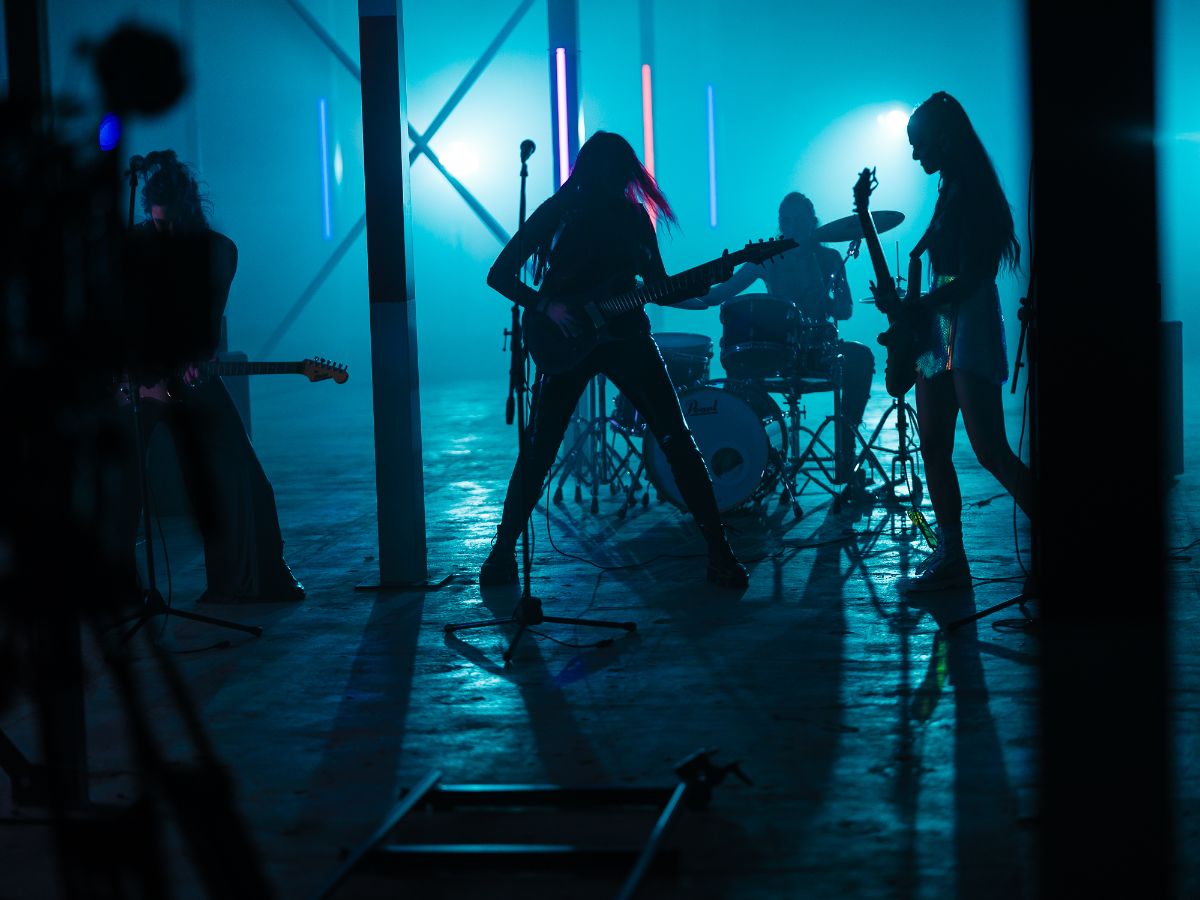 Hotly-tipped metal quartet HAWXX have shared a colourful and sinister video for their explosive new single ‘Death of Silence‘. The new track will feature on their newly announced EP You’re Only As Loud As You Shout Right Now, set for release in early 2022.

Originally inspired by the Me Too movement, ‘Death of Silence‘ is a song of solidarity and empowerment. Accompanied by volatile guitars, thunderous drums and a truly passionate vocal performance, the song is an impactful and inspiring call to action for anyone being silenced to be as loud as is humanly possible. The video, which was entirely funded by the band’s fanbase after a successful fundraising campaign, takes the core message of the song and transforms it into an ethereal metaphor, seeing the band unleash their rage as they free one another from entanglement to unite as one and step out into life together.

Speaking about the video, the band commented, “We absolutely love this video – it was important to us to have a narrative within the video of overcoming obstacles by finding, helping and supporting each other.  This message of unity was made even more poignant by the way this video was funded (completely by our fans – coming together as a community and helping us spread this message) and the way it was made – with a majority female identifying crew who related and were passionate about the concept.”

The video’s director Noomi Yates added, “The track ‘Death of Silence’ strikes a chord with me on a personal level because sadly, like most women, I’ve had my share of #metoo moments. So, to work on a video about the end of shame is empowering for me and is exactly what rock music was made for; smashing through the walls that need to be torn down. Unsurprisingly, the message behind the project attracted an almost exclusively female team. Of the 24 people who worked on the video, 20 were female, including our amazing Director of Photography, Sarah Smither. Normally film crews (just like rock bands) are pretty male-dominated, so this experience was a rare and treasured one for all involved.

“I’m especially proud of how the video turned out, not only because I think we pulled off a visual feast that does justice to the epic song, but because through collaborating with Hawxx and directing this video, I’ve been a part of the very thing that I needed as a teenager; I’ve been part of making women in rock visible. In turn, I hope all the teenage girls who see this video will feel like it’s possible for them to be rock stars too.”

HAWXX are Anna (guitar and lead vocals), Hannah (guitar and vocals), Jessica (drums) and Iman (bass and vocals) – London based but hailing from Greece, Wales, England and Bahrain. Their aim is to bring diversity and inclusivity into the rock and metal world, reforming the genre’s gender imbalance in the process. Writing songs that reflect self empowerment, the lies of the diet industry, mental health struggles and life’s daily challenges, they act as a voice for the voiceless and a beacon of hope bursting from today’s bleak landscape.

Their debut EP Deadlands received a consistent positive response from press and radio, earning support from the likes of Metal Hammer, Classic Rock, Powerplay and Rock Sound as well as airplay from BBC 6 Music, BBC Introducing, Primordial Radio and Planet Rock. They became winners of the PRS Women Make Music Award in 2020 and have since provided an exclusive performance for the Heavy Music Awards, won the London leg of Metal To The Masses and played to a packed out tent at Bloodstock Festival.

2021 sees HAWXX continue to build on their success as they prepare to amplify their message, and they’ll be shouting louder than ever before. The question is; are you listening?