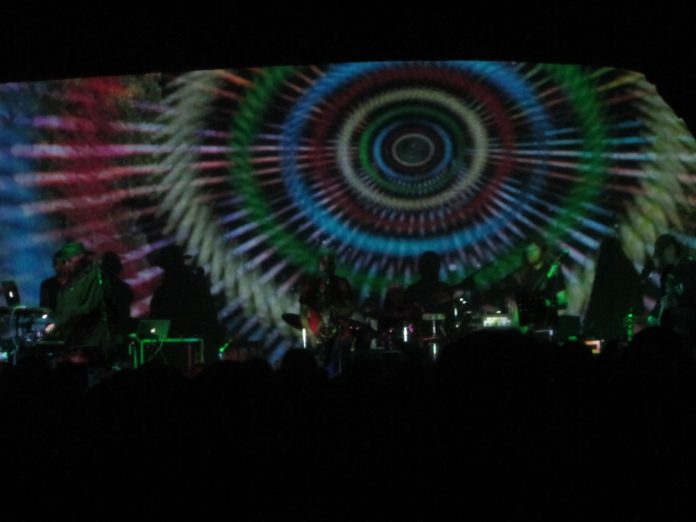 If you don`t already know Hawkwind are an English rock band and one of the earliest space rock groups having formed in 1969. They have gone through many incarnations and have incorporated different styles into their music such as hard rock, garage rock, progressive and psychedelic rock. Dave Brock remains the bands only original member, having enjoyed roles as founder, singer, songwriter and guitarist. In a recent interview, Mr Brock revealed that thirty-nine musicians have passed through the band notably Lemmy Kilmister, Ginger Baker and Huw Lloyd Langton. I first saw these guys at Crystal Palace bowl in 1985 at a charity show with believe it or not centenarian Dame Vera Lynn. They were also joined that day by Lemmy and legendary topless dancer Stacia.

I`ve been lucky enough over the last few years to get to a few of their shows and enjoy the format, which is new album release so a few new numbers, some old tracks, a cracking light show and if you`re lucky `Silver Machine` thrown in for good measure in the encore. Tonight follows the same structure.

The support tonight is none other than themselves in an unplugged or acoustic setting, which was a brave move and a little different and worked quite well.

We get a short break and then the main electric or full on two-hour set.

The lyrics favour urban and science fiction themes and we get numbers such as `Earth Calling`, `Born To Go` and `You`d Better Believe It.` The fellas have released a new album “Into The Woods”, that follows last year’s “The Machine Stops” and Mr Brock has stated that part of this album is a continuation of the story begun in The Machine Stops, “living above the ground and Into the Woods.” Therefore, we are presented with a few numbers from it with the title track “Into The Woods”, `Vegan Lunch` and the superb `Have You Seen Them.`

A couple of classics are aired with `Steppenwolf` and `Magnu` from the masterpiece “Warrior On the Edge Of Time.” The set concludes with some of my favourite tracks such as the marvellous `Synchronised Blue`, `Arrival In Utopia` and `The Machine.`

There is  a two song encore with `Hassan/Sabha` and what a lot of people have come to hear tonight `Silver Machine` and the boys take their leave. As usual the gig ticked all the boxes for me, some great tunes where at times I tripped out, some delightful background graphics to keep you interested and `Silver Machine` in the encore. What more could you want.

It would be remiss of me not to give praise for the wonderful musicians that Dave Brock has surrounded himself with, in the guise of Mr Dibs vocals and synthesizer, Richard Chadwick drums, Haz Wheaton bass and Magnus Martin Keyboardist-guitarist.

Brock has stated that as he`s now in his mid-seventies, he`d like the band to continue after he feels he`s unable to tour. Let`s hope and pray, as one of the albums state, that`s in the distant horizon.