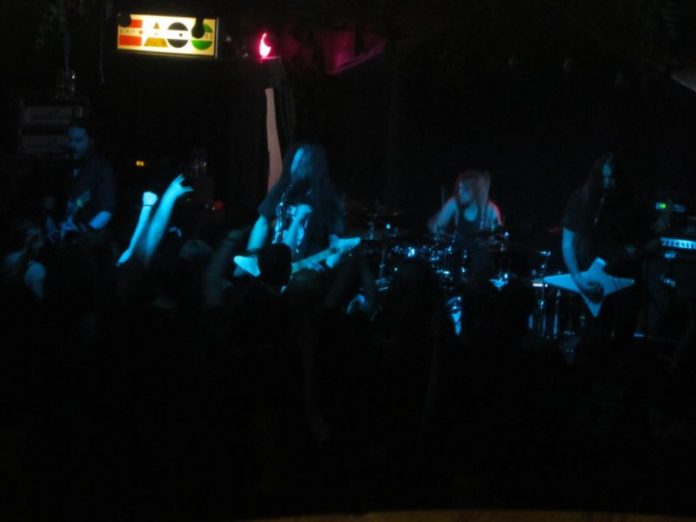 The angriest Monday night of the year?

As the Warbringer set ends, their singer John Kevill is flat on his back crowdsurfing. The tale of how he got here begins 45 minutes earlier. It is rather explained by the fact that nothing the LA five piece do has anything approaching half measures. It is only to be expected that their show should crackle with such electricity. After all, their new “Woe To The Vanquished” record is the best of their career and has only been out four days. Tonight’s first four songs are also it’s opening quartet – and show both its variants and class in equal measure. “Silhouettes” is brutal, the title track evidently is already a favourite and 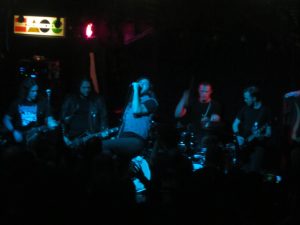 “Remain Violent” has a fine, catchy chorus which engenders a near riot in the moshpit. As the livewire Kevill is quick to point out Warbringer have been at this for over a decade now, and as a result have built up a mighty back catalogue. As the show goes on they delve into parts of it. “Prey For Death” is as vicious as you want it to be, “Severed Reality” is played at fan request and a highlight elsewhere is “Combat Shock”, which is the one that causes the frontman to take his unplanned journey. There is a real sense here that this latest new line up of Warbringer knows that this is now or it is never. This make or break situation has added a sense of jeopardy and their live sound has benefitted. As Kevill himself spits – only half joking you suspect – “people talk about retro thrash…. let’s see one of the Big 4 play that hard.”  Warbringer are finally on the battleground. The reconnaissance is over.

Like the band that precedes them, Havok have just stuck out a record that might be the defining one of their careers. “Conformicide” is a dismantling of the modern media, politics and religion and condemns the population for sleepwalking into crisis without thinking. It also thrashes. Fast and hard.

The helping of new songs tonight show this in a fine way. “Hang ‘Em High” is full of razor sharp riffs, “Intention To Deceive” excoriates the media and gets an old school pit going, while the super “Ingsoc” is a real highlight here.

There are many similarities between the main support and the headliners, not least that they’ve freshened personnel and sound better than ever. The new boy Nick Schendzielos – ex of Job For A Cowboy – does a mighty job on bass throughout and evidently has fitted in superbly. Their technical skill, however, is allied to the visceral thrill that thrash needs. Simply put, if it isn’t nasty, then it isn’t right and “D.O.A” is most certainly both.

Kevil makes an appearance on backing vocals during the last cut and such is the urgency with which “Give Me Liberty….Or Give Me Death” is delivered that you best believe that everyone here is choosing freedom.

Experienced bands in their own right, both Havok and Warbringer would correctly balk at the suggestion they were part of some “new breed” of thrash. What we can say for absolutely certain however is this: it is bands like these that carry the beating heart of the old genre into the future.