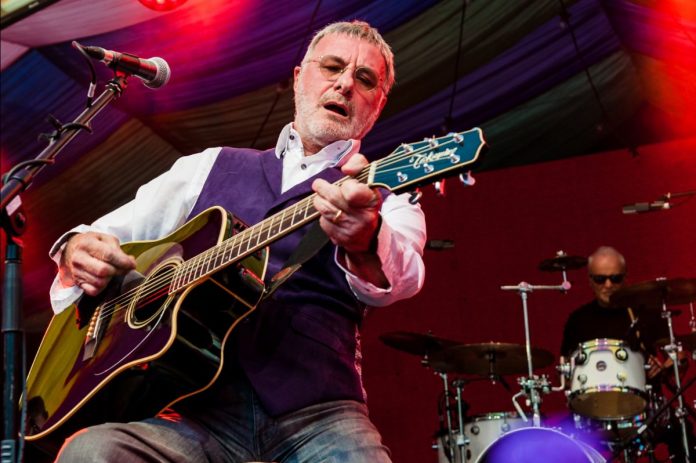 Steve Harley is delighted to announce the release of a new single from this year’s acclaimed ‘Uncovered’ album as well as a return to live performance with a set of shows.. His cover of the evergreen ‘Out Of Time’ recorded with the Steve Harley Acoustic Band will be released on 18 September 2020. The song was written by Mick Jagger and Keith Richards and featured on the Stones album ‘Aftermath’ in 1966, but was a huge hit for Chris Farlowe in that same year.  Steve says, “This was always my favourite Stones song of the sixties. Now, interpreted by my Roots, Jazz and Gospel musicians, I hope Mick and Keith will think I’ve made it my own! I wish…”

On his return to the stage, as ever, he doesn’t mince his words, “It’s been a long Spring and Summer, twiddling our thumbs, longing for the road. It’s been my life for 47 years and I’ve been desperate to play, and many fans are equally desperate for their Live music fix. Now it’s back. It will look and feel strange at first, but it’s Live music.  I can’t accept the ambiguities this government puts us through. I can sit on a plane next to stranger for 4 hours coming home from Greece, but we can’t open the theatres. Where’s the logic in this? We should be given the truth about the Covid death rate. At last, now they are starting to own up that many, many thousands of so-called deaths by the virus were falsely attributed.”

Steve’s first performance after this unwelcome hiatus came on Sunday 6th Sept at Henley-On-Thames for Tom Kerridge’s Drive-In Pub In The Park, a show with the full Cockney Rebel band on a bill that also featured Squeeze.  Then, on September 13th, the Steve Harley Acoustic Band play Gisburne Park, Lancs, to several hundred seated at tables. On September 19, the Acoustic Band play Concert At The Kings, All Cannings, Wiltshire; this show sold out within 36 hours of being on-sale.

The ‘Uncovered’ album includes interpretations of songs created in many instances by peers and contemporaries of Steve, those with shared histories and some that he admired from afar.  The Acoustic Band features Barry Wickens on viola, violin and acoustic guitar, Oli Hayhurst on double bass, Tom Hooper on percussion and the Roots Music Legend, Martin Simpson, on guitar.

Rod Stewart, who covered Steve’s song ‘A Friend For Life’, describes him as “One of the finest lyricists Britain has produced.”  MOJO magazine said simply, “Harley creates rock songs that are proud, lyrical and full of yearning.”  Steve has also been described as “A consummate performer at the top of his game”, and ‘Out Of Time’ and indeed this of live shows will bear that out.