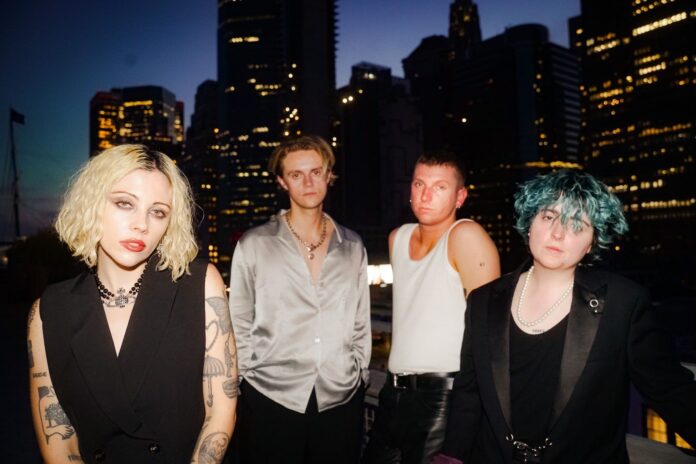 As they approach the release of their highly-anticipated third album UNWANTED on 12 August via Dirty Hit, PALE WAVES follow a run of scorching alternative-rock singles with THE HARD WAY – one of their most candid and sentimental tracks to date.

While most UNWANTED focusses on frontwoman Heather Baron-Gracie’s troubles with vanity, anger, jealousy and hopelessness, The Hard Way – her favourite song on the album – opens up even further, documenting her battle with loss and the struggle for acceptance that comes with it.

“When I was in high school a girl who was being bullied took her own life,” tells Heather. “I got on the bus with her every single morning, and I would see her sitting in her same spot. She sat downstairs and I would go upstairs. The Hard Way is about my regret for not helping her, or standing up for her, that I feel now as an adult. As a kid, you’re so shy and afraid, but I hope it will influence people to stand up for those who need help, and help people understand that their words and actions can be really damaging. You don’t know how cruel you can be sometimes, especially at that age.”

The Hard Way joins two BBC Radio 1 Hottest Records, ‘Lies’ and ‘Jealousy’, and the Apple New Music Daily premiered ‘Reasons To Live’ in asserting Pale Waves as an alt-rock force to be reckoned with.

Recorded in Los Angeles with producer Zakk Cervini (Blink 182, Modern Baseball, Halsey) Unwanted is 13 tracks of classic pop punk with an edge. Think Sum-41 by way of Veruca Salt; all the crunchy guitars and rhythmic drive of 2000s pop punk with the rage of a 90s rock band. It is a record that reaches out into the passionate community of misfits and LGBTQI+ fans around the band, tapping into darker emotions than ever before whilst also striking a fresh tone of defiance.

At the time of writing the album, Baron-Gracie was listening to a lot of Garbage, Paramore, Metric, Sky Ferreira, and Blondie – artists that fed into her desire to pull Pale Waves out of the indie and synth-pop world they started out in, towards a harder, more alternative sound. “I didn’t want any of those jangly, picky, high up on the fretboard guitars,” she says. “I wanted heavy distortion and chaos and power. So Unwanted had to be honest, provocative, and loud. Not only thematically but in the music as well.”

In addition to a packed summer of UK festival appearances, Pale Waves will celebrate the release of Unwanted with a run of UK instores, including a signing and performance at the iconic Banquet Records in Kingston.

The intimate shows will offer an appetite-whetting glimpse into the Unwanted live experience, which can be seen across the UK in November as the band embark on their biggest headline tour to date. Beginning with a hometown date at Manchester Albert Hall, the tour will culminate with a show at London O2 Brixton Academy. Tickets available now from: https://palewaves.co.uk/live/

Previous article
ONLY FANS (OF THE DARK)
Next article
FENCED OFF