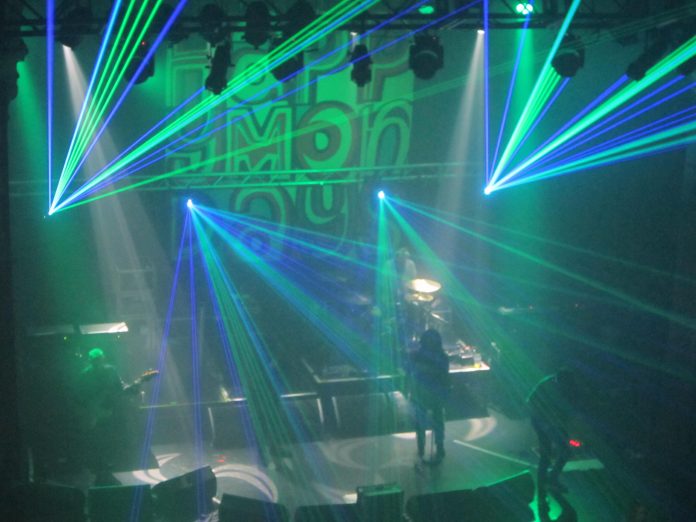 During the eighties a friend of mine, who has sadly passed away was involved in the music business and amongst his duties was to “babysit” the stars that came down to London for the day and make sure they got to the radio interviews and other promotional appointments. Most would just want a few beers, but in the late eighties he met a couple of guys who arrived from Manchester who he said had an appetite to destruction and he had never worked so hard, trying to ensure they made the scheduled meetings for that day. These fellas turned out to be Shaun Ryder and Mark “Bez” Berry. He passed me what was to be their second album “Bummed” and intrigued I got to see them live at Birmingham`s Hummingbird in November 1989. So, it was interesting to catch up with the band thirty years later.

That the band are still around and pretty much as they were that night is a real surprise, given their well-documented history. The lights dim and the band hit the stage and straight into the dance vibe of `Kinky Afro` with Rowetta and Shaun trading vocal duties. `Performance` with it`s wonderful sixties organ feel, `Donovan` and `God`s Cop` quickly follow. The classic `Loose Fit` a song that Shaun shares was banned when issued has the crowd dancing along as songs such as `Rave On`, `Bob`s Your Uncle` and `24 Hour Party People` keep this ambiance going. The show closes out with the anthemic `Hallelujah` and the guys cover of the John Kongos penned `Step On`    It`s not long before this 1500 strong nigh on sold out crowd has the band return for a final tune with `WFL` or `Wrote For Luck` These days Shaun bedecked in a baseball cap rarely moves and Bez, whose dance moves, far from lacklustre, are certainly not as manic as they were still elude that certain charisma of old. The band however are as tight as ever. It was interesting to catch up with this troupe after thirty years. It`s been a fairly long outing for this Greatest Hits tour that has been out on the road since late October and still has another week to go but if you get chance it`s worth making the effort to get to see them.