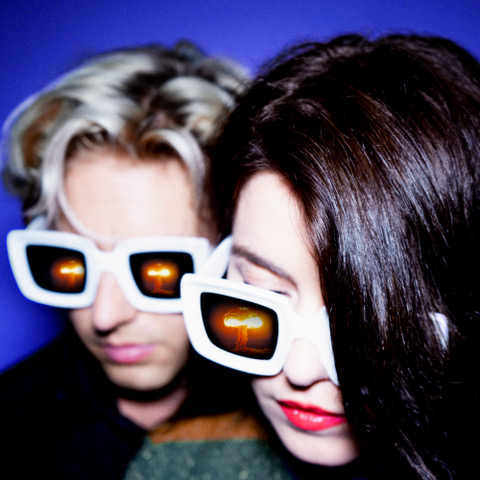 Blood Red Shoes have today shared their explosive new track, ‘MURDER ME’; the third release from their upcoming album, ‘GHOSTS ON TAPE’.

LISTEN TO ‘MURDER ME’ HERE

“The intrigue and mystery of them, the fascination of the humans on the outskirts of society and the harm people can do, the weird romance and darkness of outsiders, the threat and fear that it could happen anytime; that obsession has spilled over into many of the songs on this album, especially this one.” explains Steven Ansell.

The track itself echoes this obsession as it begins emphatically with a menacing riff, slamming the listener from the outset. Ethereal, ghostly vocals from Laura-Mary Carter lead into a stomping chorus that documents the inner thoughts of a murderous stalker; with both Carter and Ansell joining in harmony to sing the terrifying lyrics: ‘I’ve been watching you…’. In all, ‘MURDER ME’ truly affirms the notion that GHOSTS ON TAPE will be an album rich in sonic ingenuity and mystery.

The huge sound of this track and the preceding ‘I AM NOT YOU’ and ‘MORBID FASCINATION’, tease what’s to come from a project that has really brought the band closer together, both geographically and artistically. After years spent living on opposite sides of the Atlantic world events threw Ansell and Laura Mary Carter of Blood Red Shoes back together into what has become the most fruitful era of their 17 years together.

Finally, the band have also announced a run of UK & European dates in early 2022. The full list of dates is as follows: