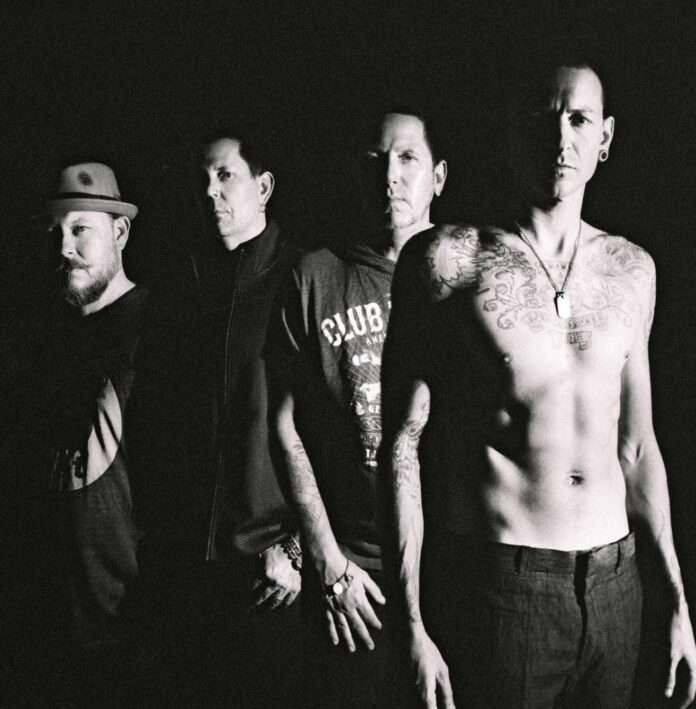 Grey Daze, the band that birthed a modern rock icon, Chester Bennington, release The Phoenix, today via Loma Vista Recordings. The 10-song bookend to 2020’s Amends, the newly-recorded album is a celebration of both Bennington and a testament to both the tenacity and talent of the surviving band members.

As news of the album’s existence was shared, Grey Daze founder, drummer and songwriter Sean Dowdell said: “Amends was more emotional and reflective. We felt sad when we were writing it. Now that we’re a couple of years removed, it’s very clear what we were going through. We were at a different stage of grief. We went through the shock and the sadness. Now, we’re back to gratitude.”

Dowdell, accompanied by bass player Mace Beyers and guitar player Cristin Davis, with producer Esjay Jones, and with the blessing of Bennington’s family, reconvened in late 2020, re-recording, and re-working the songs which initially appeared, in a very different form, on the band’s largely unknown mid-’90s releases. A group of special guests also played on the powerful new collection, with Dave Navarro and Richard Patrick featured on “Holding You” and “Believe Me” (respectively), and Bennington’s daughters, Lily and Lila, paying homage to their dad on “Hole.” The band documented the process via a YouTube series which can be seen here.

The Phoenix‘s arrival is marked with the debut of a Heidi Gadd directed video for “Drag” (https://found.ee/GD_DragVideo). Dowdell explains the themes behind the song: “‘Drag’ is a very dark and droning heavy track, but the underlying message is really special. Chester is telling us, literally, that life is too short to be intoxicated, life is too short to be a drag. It is a song that gives any listener with a substance abuse past something to feel good about, something to help pull themselves out of that dark place.”

Reception for the newly released album reflects the band’s upbeat and joyful tone, with Brooklyn Vegan calling it a “’90s alt-metal banger that finds Chester’s voice as unmistakable as heavier, Revolver describing it as “soaring,” and Rolling Stone dubbing the single “Starting to Fly” a “rock anthem.”

Over the course of Grey Daze’s first incarnation, which ran 1994 to 1997, the group recorded and released two albums. It is those albums that serve as a foundation for both Amends and The Phoenix. Prior to Bennington’s passing he publicly announced the Grey Daze’s return, which included re-recording the band’s largely undiscovered discography. With Talinda Bennington’s blessing, and working with Producer Esjay Jones, the surviving band members: Dowdell, Beyers, and Davis, moved forward, as both a way to pay tribute to their fallen brother and bandmate, but also to expose his fans to another dimension of the dynamic singer. Amends arrived in 2020, with Rolling Stone, Revolver, Billboard, and Kerrang! praising the collection. NME summed it up best, saying Amends is “a great modern rock record fronted by one of the best vocalists in the game.”

STREAM THE 10-SONG COLLECTION AND