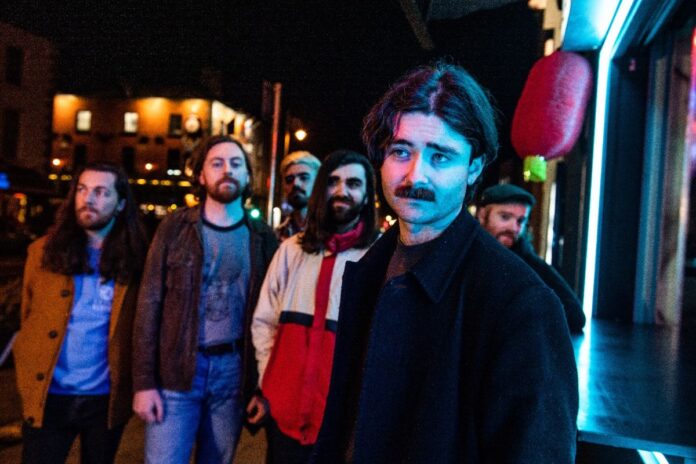 Frontman Oisín Leahy Furlong comments: “It’s about self-image, and your capacity to change. To reach beyond your comfort zone, and become a ‘better’ person. The two verses represent the two sides of your brain, one pragmatic and one a dreamer. The chorus is a third entity laughing at the prospect of the whole thing, that the struggle will never mean as much to anyone else as it does to you.”

Of the epic video Oisín Leahy Furlong comments: “‘Fear of Art’ is the final single to be released before we unveil our whole debut record, so we knew we wanted to make something special to go with it. This music video is the culmination of months of planning and a huge two-day shoot – our most expansive video yet.

“We enlisted the help of The Collective, a Dublin based production company responsible for genre-bending videos for Fontaines DC, Just Mustard, Denise Chaila and more. We collaborated with writer/director Jade de Robles Rossdale to create a treatment. The video involves a dysfunctional family reunion, complete with extramarital affairs, drug use, food fights, and even total vehicular destruction (recalling the Delusions of Grandeur album cover).”

Over the last two years the Dublin six-piece have been developing their sound and building an increasingly passionate fanbase. With a line up of two drummers and three guitarists, THUMPER‘s maximalist wall of sound has long since set them apart in the booming Dublin music scene, and has them “punching like heavyweights alongside Fontaines DC and The Murder Capital” (Chris Hawkins, BBC Radio 6).

Delusions of Grandeur reveals THUMPER‘s trademark penchant for saccharine melody and unabashed hooks, all the while set against their signature psych-drenched rumble. This harsh juxtaposition of sweet and caustic is where THUMPER thrive.

While Delusions of Grandeur features plenty of homages to classic alt rock such as Weezer, Pixies or The Dandy Warhols, it is also steeped in the influence of contemporaries such as Viagra Boys, King Gizzard, Shame and even Idles at their most psychedelic. At other points the sheer bombastic nature of its production recalls Irish psych alumni My Bloody Valentine on Loveless, or no wave veterans Sonic Youth on Daydream Nation.

Nowhere is this bombastic recording process more apparent than on the record’s final act – the 20-minute ‘Overbite’ Suite consisting of three songs recorded and performed as one long piece – this epic attempt at pushing past the mould of what a ‘song’ can be, in part justified by the album’s title.

Delusions of Grandeur however is not just a statement of musical intent. The LP’s title refers to a struggle of self image, internal and external, and the existential maintenance that all of this implies. Frontman Leahy Furlong‘s visceral and surreal lyrics obsess over the search for the ‘authentic self’ in a medium so steeped in pretentiousness.

This central tension mirrors and challenges the chaos of light and dark in the music itself, as the record continuously swings from light hearted to brutal, keeping the listener hooked the entire time.

This volume of touring is no mean feat for a band who are only now releasing their first LP, but THUMPER are not resting on their laurels. 2022 will see THUMPER head to Reeperbahn Festival and Iceland Airwaves, amongst many others.

THUMPER will be touring their record throughout this year, performing across the UK, Europe, and North America.