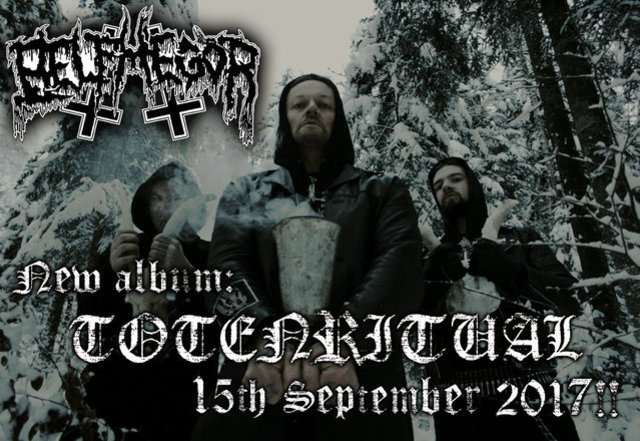 This eleventh full-length album is to be entitled TOTENRITUAL and will present nine new tracks laced with obscure magic and full of furious brutality on September 15th, worldwide. Right after its unleashing, Serpenth [Bass, grunts], Bloodhammer [drums] and singer, guitarist and founder Helmuth Lehner will embark on an intensive worldwide touring cycle.

Helmuth Lehner states:
“It is the most brutally heavy offering we have consecrated thus far. The drums are precise and very technical with loads of breaks, fills and tempo changes. The bass is like a panzer tank. Also the rhythm guitars are complete; utterly aggressive and obscure. You don’t hear guitars like that anywhere with such a massively low tuning. I’m really proud of all we have tracked so far and created for the new audial hellspawn. An honour – this horror!!”

Also check out this exclusive clip of BELPHEGOR playing ‘Totenkult – Exegesis Of Deterioration‘ recorded live inside their “rehearsal bunker“. This scorching death/black metal track will be included on the upcoming album. Crank it to the max and go to hell with them!:

Previous article
Men On A Mission
Next article
Use Your Illusory