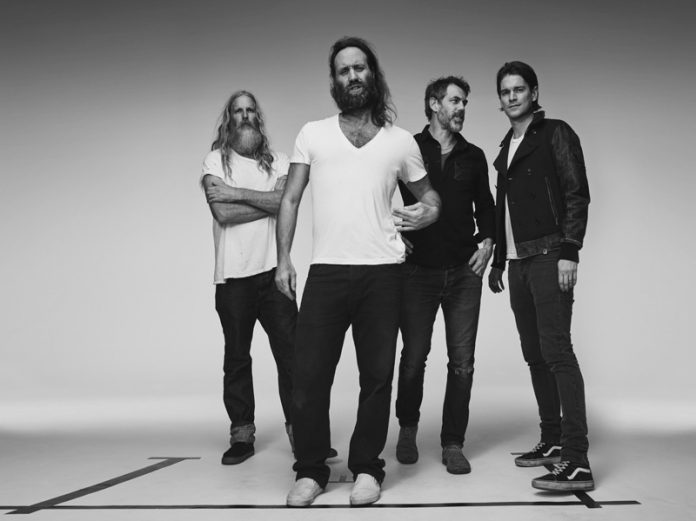 “It’s amazing to be working with Sheryl,” says Reef guitarist Jesse Wood of the track. “Who doesn’t love Sheryl Crow and her voice? And I think here it’s even better than it was when you first heard her on ‘All I Wanna Do.'”

Chris Evans gave ‘My Sweet Love’ its radio premiere on Radio 2 earlier this week, and interviewed Reef vocalist Gary Stringer about the collaboration. Evans loved the song so much he played it twice in a row, saying “that is a fantastic song. Thank you Reef, and thank you Sheryl Crow.” Listen to his interview again here www.bbc.co.uk/programmes/p062fw7g

Reef’s first studio album since 2000’s ‘Getaway’, the bracingly thrilling ‘Revelation’ is what its title promises: an ear-tingling, heart-stirring, head-spinning comeback record that is less the sound of a group reborn than one born for the first time.

“We didn’t want to just make a good record, we wanted to make a great record,” says Reef vocalist Gary Stringer of the album. “We were writing the songs for two and a half years, road-testing them when we were on tour. We’d play four or five new songs every night, really watching the crowd. If their eyes glazed over or they went to the bar, then we dropped those songs! But if a song engaged with them, then that was a real pointer for how we went about it. Hopefully that’s helped make the album is as strong as it is.”
‘Revelation’ was recorded in Ireland and with legendary producer George Drakoulias (The Black Crowes, Primal Scream, Tom Petty & The Heartbreakers). “It’s a better world with Reef in it, their love for life and music is infectious,” he says. “A real privilege to be on this journey with them.”

In 2016, Reef returned with their first single since 2003, ‘How I Got Over’, which was A-Listed at Radio 2 and saw the band perform live on Chris Evans’ radio show and on The One Show on BBC1. Reef were personally invited by Chris Martin to support Coldplay at Wembley Stadium, and also released their live album ‘Reef: Live At St Ives’, recorded over two sold-out nights at St Ives Guildhall.

Reef formed in 1993 and were quickly signed to Sony imprint S2. They released nine Top 40 singles – most famously ‘Place Your Hands’ – and four studio albums, including 1996’s platinum-selling No.1 album ‘Glow’, plus greatest hits album ‘Together’ before disbanding in 2003. Their hiatus came to an end in 2010, when they were tempted into reuniting for a short tour. In 2014 Jesse Wood, formerly of the Ronnie Wood band/Faces/Red Racer, replaced original guitarist Kenwyn House after he amicably left the band to pursue other projects.

Reef will be on tour throughout April and May, including the Britrock Must Be Destroyed! Tour with The Wildhearts and Terrorvision with includes a show at London’s Eventim Apollo on May 6th. Full details below.