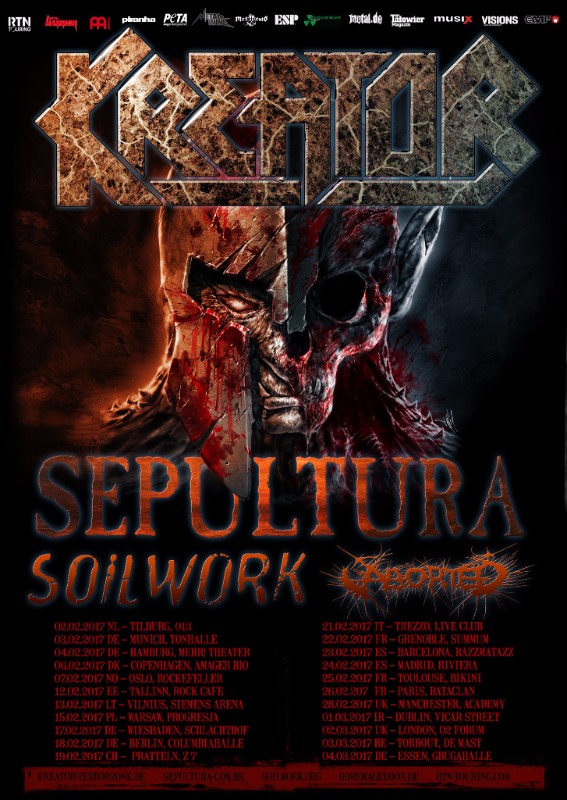 PREPARE YOURSELVES TO RAISE THE FLAG OF HATE AGAIN!

In early 2017, German thrash giants, KREATOR, will tour Europe in support of their upcoming, yet untitled new record. Legendary guitarist/singer Mille Petrozza and his crew will be accompanied by a varied as well as iconic billing. Brazilian-American extreme metal pioneers SEPULTURA are announced to be direct support to the headliners, followed by visionarySwedish melodic death metallers SOILWORK and Belgium’s finest death/grind outfit, ABORTED.

Commented Mille Petrozza: “Finally we are gonna be back on a headlining tour through Europe again. It will be more than two years by then since our last run and we have some amazing ideas for a new stage show, supporting our new album. It will be nothing less than spectacular, I promise! Looking forward to see all of you metal maniacs in 2017. And this will just be the beginning…”

KREATOR: Ever since their inception in the early 1980’s, KREATOR have pushed boundaries not only in speed/thrash metal in general but also influenced countless bands in other extreme metal genres. With iconic outputs like ‘Endless Pain’, ‘Pleasure To Kill’ and ‘Extreme Aggression’ under their belt the band is mainly responsible for putting Germany on the map of extreme music.
Unlike other acts in the genre, KREATOR managed to maintain their status even throughout the difficult 1990’s when grunge dominated the music world. Ever since the early 2000’s KREATOR have taken their sound and thrash metal in general to the next level by releasing modern classics like ‘Violent Revolution’, ‘Enemy Of God’, ‘Hordes Of Chaos’ and most recently ‘Phantom Antichrist’. Fans and critics alike are looking forward to what KREATOR will be up to with their next, 14th record.

SEPULTURA: What is there to say about SEPULTURA that had not been said already? Guitarist extraordinaire, Andreas Kisser, and his gang of extreme metal lunatics have proven to prevail for over 32 years now. Be it the early iconic releases like ‘Beneath The Remains’ and ‘Arise’, the huge chartbreaking ones like ‘Chaos A.D.’ and ‘Roots’ or modern extreme metal milestones like ‘A-lex’ or ‘The Mediator Between Head And Hands Must Be The Heart’, SEPULTURA have shown how versatile and relevant they’ve always been and still are today. With a brand new record underway, the band will showcase a new brand of chaos at these upcoming shows.  Comments Andreas Kisser “I’m so happy to have the chance to tour with Kreator and Soilwork in Europe. Kreator are one of my main early influences in heavy music, it will be a privilege to share the stage with them. We are going to have a new album out in autumn 2016, and the tour with Kreator will be our first shows in Europe playing the new songs live, I couldn’t think of a better way to start this new cycle. Rise Up Sepulnation, 2017 will be an amazing year for all of us, see you all on the tour! DESTROY!”

SOILWORK: No other European band has been as influential for modern extreme metal as these Swedes. SOILWORK revolutionized melodic death metal the day they started out by adding clean vocals, a forward-thinking mindset, progressive elements and ridiculously great guitarwork. Over the years the band has evolved to something so remarkably unique and set the blueprints for a modern sound other bands gladly took in. With their current masterpiece ‘The Ride Majestic’ SOILWORK are a great addition to this varied tour bill.

ABORTED: As one of a few successful artists from Belgium, ABORTED have always stood out from the rest. With the new album, ‘Retrogore’ out now and their unique blend of death metal and grindcore elements accompanied by sick artworks and brutal live performance, the quartet is set to unleash hell when opening the shows every night.

Full tour-dates and UK ticket links below, on sale this Friday 13th at 11am.