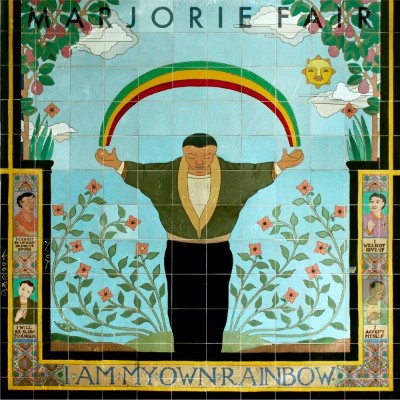 New Jersey-natives Marjorie Fair have announced the release of their highly anticipated second album I Am My Own Rainbow, set for digital release on Psychic Bully Records on 25th March. It comes 12 years after its critically acclaimed predecessor, Self Help Serenade – the band’s debut album.

Similarly vaulting in ambition and scope, the beautifully kaleidoscopic songs onI Am My Own Rainbow pick up the mantle of dreamy, psych-pop that Marjorie Fair made their own back in 2004.

“I tried to do what I attempted on the first record which is to find a balance of textures and tones that the things that have inspired me have shaped,” says lead singer and songwriter Evan Slamka, “while allowing the songs to remain fully open, vulnerable and as free as possible within that framework.”

The elements of Slamka’s songs – minor-to-major key melodies, chord changes with a funhouse tilt, aerial choruses, contemplative lyrics – have a classic sound that’s grounded in the past but also reaches up and out towards something new.

For the new album, he collaborated with drummer and producer Joey Waronker (Beck, REM, Atoms for Peace), Grammy-winning engineer Darrel Thorpe (Outkast, Air) and bandmate/collaborator Nic Johns. Mike Andrews (Donnie Darko, Inara George, Greyboy Allstars) contributed his talents on ‘Songbird’.  Slamka says, “Joey was the producer- He, Nic, and I played a majority of the instruments. Many of our local friends and co-conspirators joined in along the way. Good memories, great times!”

Marjorie Fair’s long lost, but much-acclaimed debut, Self Help Serenade, was produced by Rob Schnapf (Elliot Smith, Kurt Vile), with co-production by Jon Brion (Rufus Wainwright, Fiona Apple) and featured such studio heavyweights as Jim Keltner and Billy Preston. The band toured Europe and the US multiple times, opening for Modest Mouse, Phoenix, The Doves, The Shout Out Louds and The Church. They performed at the 2004 Glastonbury Festival, and in 2006, opened amphitheater shows for a double bill of Sheryl Crow and John Mayer, including a performance at Red Rocks.

In the ten-year gap since Slamka put the band on hiatus, he has played on sessions, toured with singer-songwriter Carly Ritter, wrote a screenplay, began restoration on an old school bus that he plans to use as a mobile home / touring vehicle, did odd jobs, and most importantly, helped raise his young daughter.“One of the major factors in delaying this record’s release for years was wanting to spend as much time with her, so I decided to stick as close to home as possible.”

And now, with Marjorie Fair’s return, Slamka plans to take the band out again on tour (maybe in that modified school bus) in support of I Am My Own Rainbow. In typical fashion he has modest, but hopeful expectations for the record. He says, “I just hope that whoever listens to any of the album gets a kick out of it somehow.”