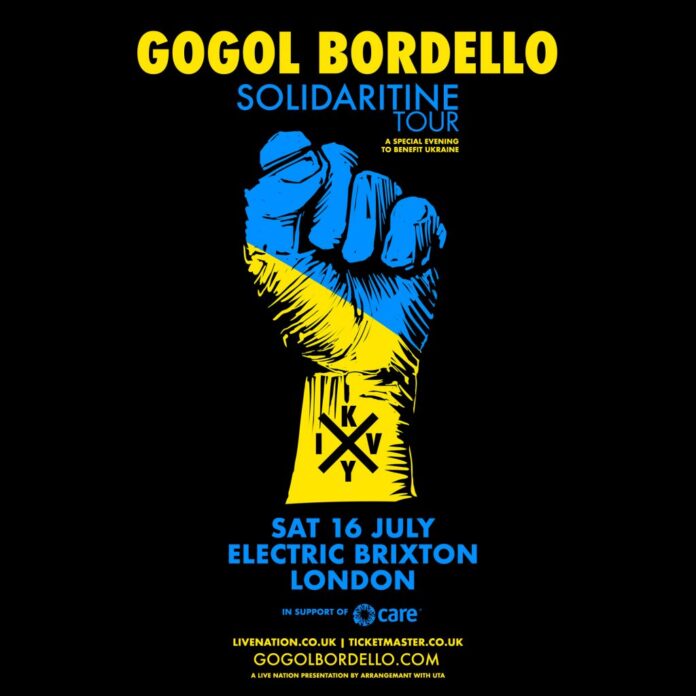 Returning to London for the first time since 2017, self-proclaimed gypsy punk rockers
GOGOL BORDELLO will be performing a special, intimate show at London’s Electric
Brixton on Saturday, July 16th. As the final show of the band’s European tour, £5 of
each ticket purchased will be donated by the band to Care.org’s Ukrainian Crisis
Response. An option for additional donations will be available as well.

“London always responded raucously to what we do, perhaps because of its own class
struggles” says frontman Eugene Hütz, “Punk and hardcore is like a cultural-
humanitarian corridor between all countries that deals with those issues, and a lot of it
developed and grew muscles here. We are always excited to energise that corridor.”

“Since the beginning of invasion, London has been a very central place of support for
Ukraine’s Victory – not only with fundraising events, but with every tangible kind of
support to bring about Ukraine’s Victory as fast as possible,” he continues. “We
appreciate it tremendously. Much respect for that.”

Bearing witness as his homeland endured the heinous barrage of a violent and deadly
invasion from Russia, Eugene recently joined forces with Les Claypool of Primus to
collaborate on ‘Zelensky: The Man With the Iron Balls’ a joint release to rally support
for the Ukrainian people. The track also features Stewart Copeland, Sean Lennon,
Billy Strings, and fellow Gogol bandmate Sergey Ryabtsev. Proceeds from the sale of
the single will be donated to Nova Ukraine, a nonprofit organisation dedicated to
providing humanitarian aid to the people of Ukraine.

In addition, Eugene collaborated with NYC punk stalwart Jesse Malin for a cover of The
Pogues’ classic ‘If I Should Fall From Grace With God’. Released exclusively via
Bandcamp, all proceeds for this single will benefit the U.S.-Ukraine Foundation, which
“supports the development of democracy, a free-market economy and human rights in
Ukraine, and the strategic partnership between the U.S. and Ukraine.”

Furthering their support from the Solidaritine Tour, GOGOL BORDELLO have teamed up
with Cauze, a modern Donor Advised Fund, who will collect proceeds from the tour to
donate to Care.org’s Ukrainian Crisis Response. For more information,
please visit their website – HERE