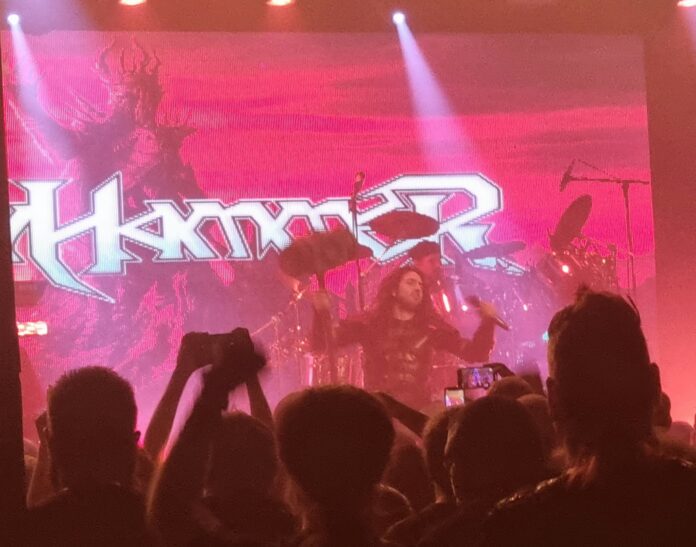 My Greek mythology is sketchy, but according to Wikipedia Arion is a divinely bred, fabulously fast, black-maned horse. Take the words “Black” and “Horse” out of that and you can see why this Arion named themselves in such a way. The five piece have come from Finland with power metal in their hearts and fists held high, and in singer Lassi Vääränen they’ve got a man with the mane of hair to match his stunning vocals. Moreover, he’s the type of frontman that isn’t going to stop until he’s won you over and this type of battle metal, if you will, has a canon of songs emerge victorious in any war. “Punish You” thinks the new wave of British Heavy Metal is still new, and if “Unforgivable” and “Bloodline” are slabs of power metal, then my goodness they are done well. Iivo Kaipainen’s riffs, keyboard man Arttu Vauhkonen adding the symphonic touches and the rhythm section absolutely thundering, it’s pretty much impossible not to be swept along. “At The Break Of Dawn” sees Lassi get more personal with his friends at the front, but there’s something inescapable. Like a tidal wave of metal, you aren’t outrunning Arion, so your only option is to saddle up and enjoy the ride.

On their Facebook page in the bio it says of Brothers Of Metal “some say they are the greatest metal band ever.” Watch them here for 40 minutes and it’s hard to disagree. There’s about 47 of them (I think there’s eight, but they lend themselves to hyperbole) and one of them, Mats Nillson, is wearing a kilt (he’s conquered Scotland, don’t ask) and along with lva Eriksson and Joakim Lindbäck Eriksson he’s one of three singers in the band. Brothers Of Metal do power metal the way everyone should: So ludicrously you couldn’t explain it to anyone with a straight face. They are incredible, they are a force of nature and they’ve got songs to match. “The Death of the God of Light” doesn’t so much usher them in as lead a blitzkrieg and “Ride of the Valkyries” would see being called OTT as a compliment,  “Yggdrasil” (“the best song in your world” reckons Nillson) is rather good and “Mead Song” is utterly aware its not sensible, but here’s the thing: by the time they’ve had the audience kneeling and split them into three for “Fire Blood and Steel” then there’s no one who hasn’t bought into this totally. The type of band you’d see in a tent at Bloodstock at 3pm on the Saturday and be the band of the weekend, Brothers Of Metal prove Odin has the best tunes.

Back in December, Gloryhammer played a support slot to Alestom.  I wrote these words: “Gloryhammer are unique. Other bands would – if they could – sound like them, but it’s futile. Everyone else is too puny and weak, frankly.”

That’s not quite true tonight, obviously, in the context of what had gone on before – BIM look like they’d arm wrestle Satan if he was game – but they are unique. They are sensational, too. But they’ve got this sorted. They know how to be Gloryhammer.

So the usual (and it feels ridiculous to write that) cardboard cut-out of Tom Jones appears for “Delilah”, and Angus McFife belts the goblin to death in “Gloryhammer” (the song) and there’s the usual drink with The Hootsman in the middle and “The National Anthem of Unst” plays us out, but just think, if they are the usual things they do – then what are the songs like?!

And that’s the point, not just for the headliners, but for every band on this bill. They’ve all got brilliant power metal songs.

It’s not too much of a stretch to suggest that you have to think on a slightly different level to come up with “Land Of Unicorns” or the slow building “Fly Away” (there’s unicorns there too, just assume they’ve all got unicorns and goblins in) but Christopher Bowes is the man that does. Here he plays the evil Zargothrax, in practice he stands behind his keyboards and gives a couple of soliloquys. It always seems like he’s enjoying not being the frontman he is in the aforementioned Alestorm.

I’d also hazard a guess that when he wrote the debut album – from which “Magic Palace” comes – that he never imagined there’d be another two already. But there’s something about Gloryhammer’s craziness that has always appealed.

“The Hollywood Hootsman” sprinkles stardust, “Legend of the Astral Hammer” nails it (sorry) and after “Hootsforce” ends the set, they return for what Sozos Michael (who’s playing Angus McFife these days) terns “some classics”. In Gloryhammer terms they are. One day there may be a show they play without “Angus McFife”, “Universe on Fire” and “The Unicorn Invasion of Dundee” in, thankfully its not tonight’s.

The controversy that dogged them late last year, around the departure of the original McFife, appears to have had no effect. Indeed, this is the biggest crowd, comfortably, I’ve seen them headline to, and if everyone deserves a second chance, then Gloryhammer are grasping theirs.

The easiest way to sum up tonight’s incredible performances is this: these three bands are what your non-metal liking mates think all heavy metal sounds like. It doesn’t so much these days. Be glad it did here.

Previous article
REVIEW: TYLER BRYANT AND THE SHAKEDOWN – SHAKE THE ROOTS (2022)
Next article
BAND OF THE DAY: RUBY THE HATCHET